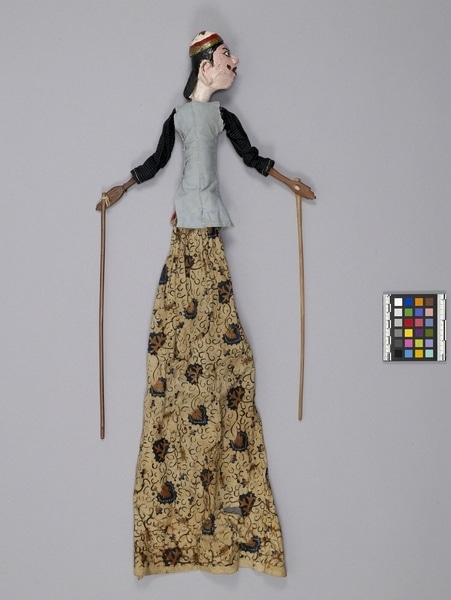 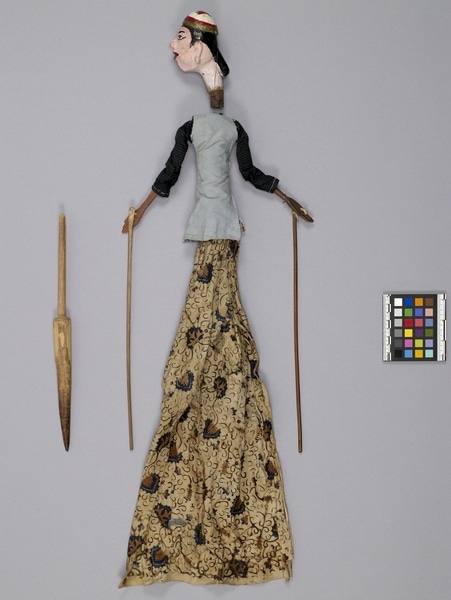 Three-dimensional male humanoid puppet: large head (part b) fits into body with skirt (part a), and a control rod (part c) with a long shaft that passes through the body and fits into the neck of the figure's head. The body has jointed arms, each with a long controlling rod attached. Pink face, small nose, long neck, red lips, black eyes and hair. Headdress: cap, red star on white with red and gold bands at rim. Gold band appears to have a layer of green paint under it. Body: distended belly, rope protruding from neck. Clothing: light blue tutupan with green and black striped sleeves, red under-tunic, dark blue, natural and light brown batik sarong. Hands attached with cord to control rods. Puppet held by rod running through body and head.

Javanese puppetry as an art form probably developed by the 11th century. The three-dimensional wooden wayang golek puppets of western Java, which are to be distinguished from the earlier and more sacred wayang kulit shadow plays puppets or other forms, appeared during the 16th century. Originally the plays depicted Javanese mythology, but after the Indian conquest of Java the Hindu epics, Ramayana and Mahabharata, were incorporated into the cycles, which comprise about 200 plays. An individual or group hires a dalang (puppet-master) to celebrate important occasions. The performances often last all night and are generally presented in three acts, with vocal and instrumental accompaniment. The individual plays vary widely in detail but usually involve conflict between good and evil. They serve a moral and religious purpose, and more recently, one of political commentary. Each puppet's character is represented by its appearance and placement onstage; protagonists with strong elements of good are placed to the right, antagonists of violent or evil nature to the left. Sekar Pandan appears as a clown and servant. He is a seldom used puppet.

Long neck, small nose, and forward looking head suggest the character of Sekar Pandan, the brother of Semar's wife. His clothing, a plain cap, tutupan, and batik skirt place him in the clown-servant class. Semar is the dwarf clown within this category. Sekar Pandan's long neck is due to an incestuous relationship with his sister, Sutiragen. His alternate name is Catrik.