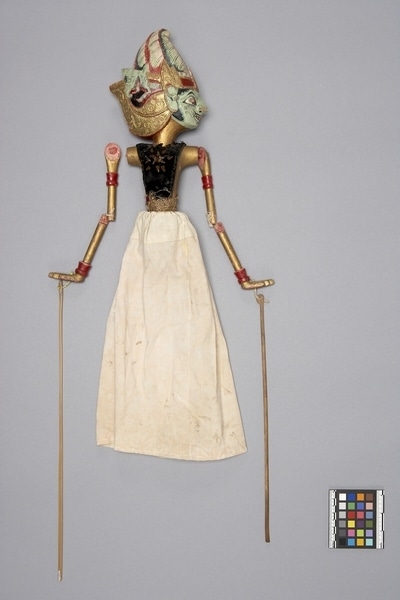 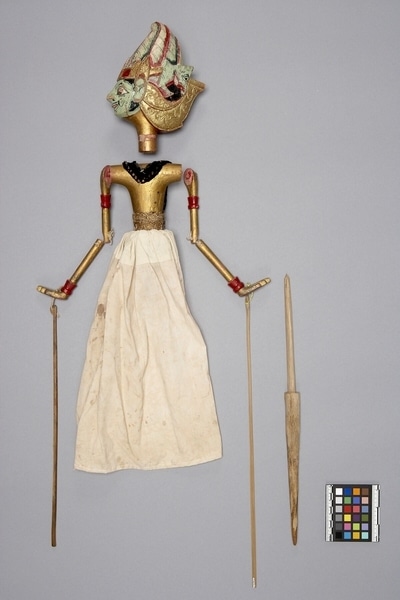 Male humanoid body (part a), green head (part b) attached to a rough wooden rod (part c). Head surmounted by gold ear ornament and diadem, green bird and upswept hair curl at top with green and red decoration. Upright head with straight nose, almond eyes with red irises, teeth exposed in mouth, and black moustache and beard. Neck is gold coloured, as is torso. Clothed in black velveteen apron decorated with amber coloured beads on chest. Long skirt, soiled, in pale orange and white pattern with beige band on top. Red thumbtack on left of puppet on gold mesh belt. Arm on left (part d) not attached to puppet, gold coloured with red wrist and upper arm bands. Attached at elbow with string; does not fully extend outwards. Arm to right similar but attached to puppet. Both arms have long sticks attached at hands by strings.

Javanese puppetry as an art form probably developed by the 11th century. The three-dimensional wooden wayang golek puppets of western Java, which are to be distinguished from the earlier and more sacred wayang kulit shadow plays puppets or other forms, appeared during the 16th century. Originally the plays depicted Javanese mythology, but after the Indian conquest of Java the Hindu epics, Ramayana and Mahabharata, were incorporated into the cycles, which comprise about 200 plays. An individual or group hires a dalang (puppet-master) to celebrate important occasions. The performances often last all night and are generally presented in three acts, with vocal and instrumental accompaniment. The individual plays vary widely in detail but usually involve conflict between good and evil. They serve a moral and religious purpose, and more recently, one of political commentary. Each puppet's character is represented by its appearance and placement onstage; protagonists with strong elements of good are placed to the right, antagonists of violent or evil nature to the left. The character of Indra appears in significant roles in both the Ramayana and the Mahabharata cycles of plays, probably appearing to the right regardless of his alignment in the actual plot.

Small face, thin nose, rich garments denote a refined or noble character. Upright head with straight nose, large eyes, red irises and pink and green face are considered negative qualities, representing arrogance or possibly evil. Features of face and ornate headdress are typical characteristics of Indra, a god of the Hindu mythology, and spirit-father of Arjuna, the third of the Pandawa brothers.