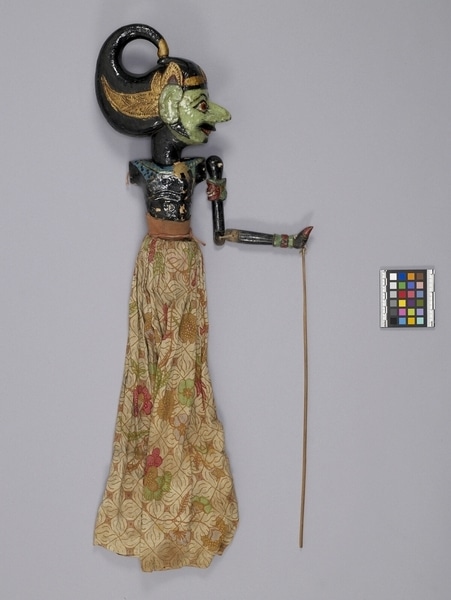 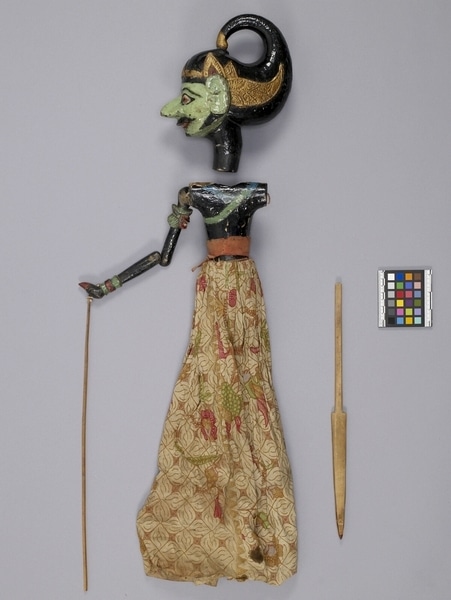 Javanese puppetry as an art form probably developed by the 11th century. The three-dimensional wooden wayang golek puppets of western Java appeared during the 16th century. Originally the plays depicted Javanese mythology, but after the Indian conquest of Java the Hindu epics, Ramayana and Mahabharata, were incorporated into the cycles, which comprise about 200 plays. An individual or group hires a dalang (puppet-master) to celebrate important occasions. The performances often last all night and are generally presented in three acts, with vocal and instrumental accompaniment. The individual plays vary widely in detail but usually involve conflict between good and evil. They serve a moral and religious purpose, and more recently, one of political commentary. Each puppet's character is represented by its appearance and placement onstage; protagonists with strong elements of good are placed to the right, antagonists of violent or evil nature to the left. In the Mahabharata epic Bima is the second Pandawa brother, and the most fearsome warrior. The Pandawas are righteous, spiritual and refined; they are in constant conflict with their cousins, the evil Kurawas, over disputed rights of ascendance to the throne of their kingdom. However, the fight can be ambiguous as characters can have both good and evil traits. The cycle of plays spans twelve generations, beginning with the original descendants of the semi-divine Pandawas, to the final battle in which the Kurawas are finally destroyed. Bima is overbearing with self pride and is never subservient, even to the greatest of gods.

Skin fold indicating corpulence, elaborate headdress with gelung supit urang and sumping but without jamang, large nose and red eyes, forward bending face, snake around neck and long, sharp nail, are all distinguishing characteristics of the warrior knight, Bima. His sharp nail is used as a weapon; his bare chest shows that he is not descended from humans.