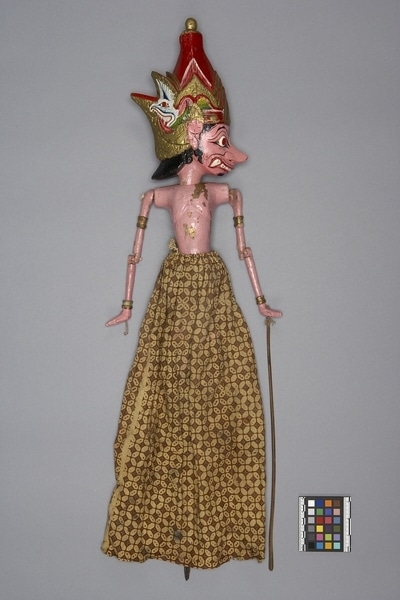 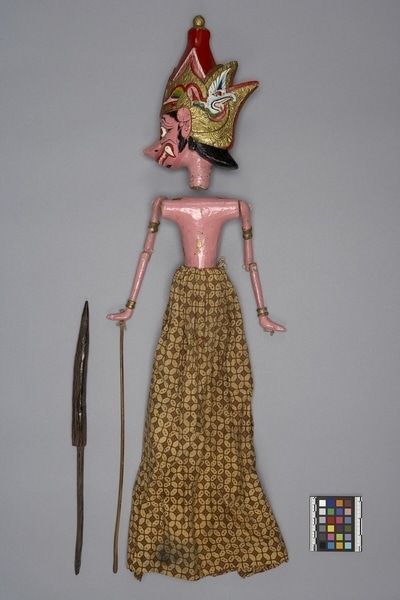 Three-dimensional male humanoid puppet: large head (part b) fits into body with skirt (part a), and a control rod (part c) with a long shaft that passes through the body and fits into the neck of the figure's head. The body has jointed arms, each with a long controlling rod attached. Pink face, black bushy eyebrows over an upward turned long nose. Open mouth showing white teeth and a single fang extending from each corner of the upper jaw; evident overbite. Black painted goatee on chin. Cap-like crown with six points: includes jamang, sumping and fringe of hair with one kendit. Crown is painted gold and red and has a Garuda Mungkur. Upper body and arms unclothed. Some chipped paint on chest. Two arms; jointed at elbow and shoulder with string and attached at each hand to a controlling wand. Ornaments on upper arm, hands face upwards. Wand is missing from the puppet's right arm. Batiked skirt in yellow with brown checkered pattern with a brown diamond at each joint.

Javanese puppetry as an art form probably developed by the 11th century. The three-dimensional wooden wayang golek puppets of western Java appeared during the 16th century. Originally the plays depicted Javanese mythology, but after the Indian conquest of Java the Hindu epics, Ramayana and Mahabharata, were incorporated into the cycles, which comprise about 200 plays. An individual or group hires a dalang (puppet-master) to celebrate important occasions. The performances often last all night and are generally presented in three acts, with vocal and instrumental accompaniment. The individual plays vary widely in detail but usually involve conflict between good and evil. They serve a moral and religious purpose, and more recently, one of political commentary. Each puppet's character is represented by its appearance and placement onstage; protagonists with strong elements of good are placed to the right, antagonists of violent or evil nature to the left. Kumbakarna is an ogre king. He is considered evil, but also brave, powerful and loyal. However, he is best known for gluttony, sloth, and brutality. A warrior and lover of war, he is the enemy of Rama in the Ramayana cycle of plays. He is the son of Begawanumb and Dewi Suke.

Pink humanoid face, large eyes with red irises, long upturned nose, and downward fangs and crown with Garuda Mungkur are all distinguishing characteristics of Kumbakarna, the ogre king. His pink and red shades indicate violent and cruel nature. His crown indicates a certain nobility; uncovered arms and chest show that he has no human ancestry.