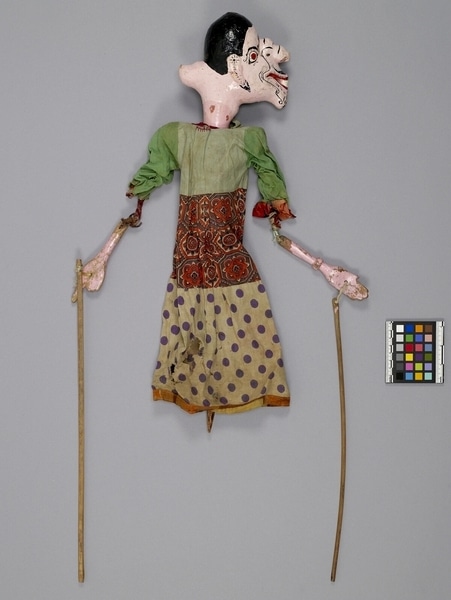 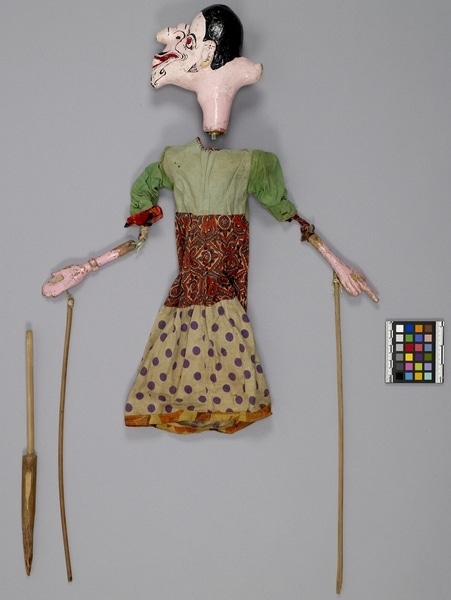 Three-dimensional male humanoid puppet: large head (part b) fits into body with skirt (part a), and a control rod (part c) with a long shaft passes through the body and fits into the neck of the figure's head. The body has jointed arms, each with a long controlling rod attached. Wooden detachable head and neck are painted pink with black hair. Face has bright red lips which grin, exposing large single front tooth. Chin is prominent, nose is large with two bumps. Black moustache is painted on; white eyes with red pupils. Back of neck has large protruding bump. Rough stick extends through torso to head; concealed beneath colourful three-tiered dress. Green sleeves with red and black cuffs, light green bodice, orange and brown print below torso, and lower section of purple dots on beige background with a brown, light brown, yellow and orange print border at hem. Upper arms under sleeves are braided rags, lower arms are pink wood. Large pink hands with extended index finger on left. Sticks attached to arms with string.

Javanese puppetry as an art form probably developed by the 11th century. The three-dimensional wooden wayang golek puppets of western Java, which are to be distinguished from the earlier and more sacred wayang kulit shadow plays puppets or other forms, appeared during the 16th century. Originally the plays depicted Javanese mythology, but after the Indian conquest of Java the Hindu epics, Ramayana and Mahabharata, were incorporated into the cycles, which comprise about 200 plays. An individual or group hires a dalang (puppet-master) to celebrate important occasions. The performances often last all night and are generally presented in three acts, with vocal and instrumental accompaniment. The individual plays vary widely in detail but usually involve conflict between good and evil. They serve a moral and religious purpose, and more recently, one of political commentary. Each puppet's character is represented by its appearance and placement onstage; protagonists with strong elements of good are placed to the right, antagonists of violent or evil nature to the left. Petruk is a character common to virtually all sets of wayang puppets. He is one of the few indigenous additions to the Hindu tradition which perpetuates a older religious form of the islands. Although his role is most commonly one of trivial buffoonery, Petruk (and to a lesser degree other clowns) are an important contrast to his noble masters who he often ridicules. He provides levity to the otherwise serious plays and spiritual concerns, which demonstrates the flexibility of the theatrical form and perhaps accounts to some extent for its popularity. Petruk often looks past the scope of the plays to more topical or political concerns; the puppeteer deviates from traditional language and etiquette only when playing a clown.

Pink face commonly associated with angered or uneven temperament. Facial expression irreverent and immodest, as are gaudy clothes. Red eyes, grotesque or ugly features considered representative of evil. Bulbous features, long erect nose, and single tooth identify this character as Petruk, a major figure of the wayang, who is a figure from indigenous, pre-Hindu Javanese mythology, although many of his are adapted from it. His obviously evil features are manifested in his ridicule and inaustere comments of his masters, the noble Pandawas.