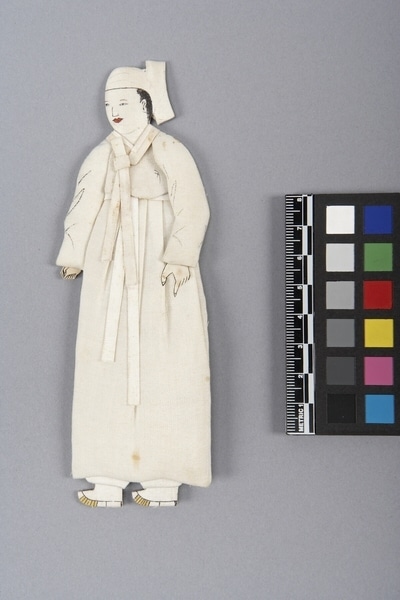 Figure representing a person on a flat backing of white paper. Front view is depicted of the figure, which is made of cloth lightly padded to give a three-dimensional effect having each portion made of a separate piece of cloth with painted details. Hands are made of paper. Face is made of white silk. Wearing a white headdress, a short blouse of white cotton fastened on the upper right with ribbons of the same, a white cotton ankle-length skirt fastened under the arms with a ribbon of the same, under which, there are white trousers, and straw sandals.

Figure represents a middle aged woman from the northern part of Korea, from the late 19th to early 20th centuries. Such figures were made during the time when Korea was first open to the outside world (after the mid 1890s), probably as gifts to present to missionaries or other visitors from foreign countries. Flat dolls like these were very popular during the period 1910-20. Before that time, shamans made dolls that they sold to their clients, as images of those the clients wanted to exorcise. Simple dolls were made of straw for children to play with. After Korea opened, people began to see dolls as artistic objects. They were made in workshops by masters, using authentic fabrics whenever possible, as their purpose was to introduce foreigners to Korean society.
Everyone in Korea was expected to wear mourning at the time of a national funeral, such as the time when a queen was murdered by the Japanese. Such clothing would be worn whenever people went outdoors. As men went out more than women did, their mourning clothes were of better quality cloth. The person’s social class was not apparent in such clothing. Rural men would wear the traditional Korean hat “Gat” and a long coat, “Doo-ru-ma-gui”. Women like this one wore white cotton towels around their heads, and jackets, “Jo-go-ri” that were longer than usual.

Collected by J. H. Morris while he was chief engineer for Seoul Railway, Korea.

The clothing was stitched around the edge and then a layer was added inside the clothing. Each section was separately applied and pasted in place. The details were finely painted.