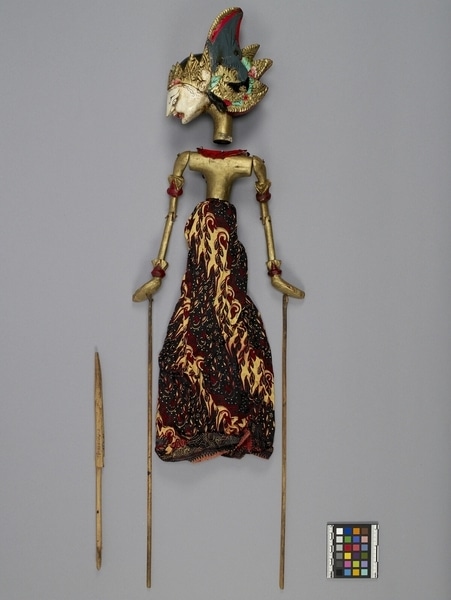 Three-dimensional male humanoid puppet: large head (part b) fits into body with skirt (part a), and a control rod (part c) with a long shaft that passes through the body and fits into the neck of the figure's head. The body has jointed arms, each with a long controlling rod attached. Head positioned downwards; white face with straight, pointed nose, small red mouth and small teeth. Eyes, moustache, hair, and other facial details in black. Brown staining on head and headdress. Large grey Garuda Mungkur facing the rear on headdress; diadem, sumping, badong, and siyung jawi. Conventional sekar kluwih headdress, in red, gold, and green. Neck and upper torso gold; red and gold ornaments on each arm at bicep and wrist. Hands held flat and bent back at wrist. Red chest covering and apron with blue and green sequins with bead centres, and brown outline sewn on. Apron has stained yellow fringe. Batik skirt (blue, purple on beige).

Javanese puppetry as an art form probably developed by the 11th century. Wayang golek puppets of western Java appeared during the 16th century. Originally the plays depicted Javanese mythology, but after the Indian conquest of Java the Hindu epics, Ramayana and Mahabharata, were incorporated into the cycles, which comprise about 200 plays. A dalang (puppet master) performs the plays to celebrate important occasions, usually in three acts, with vocal and instrumental accompaniment. Typically they serve a moral and religious purpose, and more recently, one of political commentary. Important characters often have more than one puppet to represent differences in state or mood. They usually have other names. In this case, the puppet seems to be varied only slightly from one of two puppets, Parikesit (the more likely because of the white face) or Salya. Both characters are found in the Mahabharata cycle, both are princes (raden) early in the cycle, Parikesit later becomes a king (prabu).

Each puppet is characterized by its wanda, a Javanese word which describes the specific mixture of elements of size, form, colour, ornamentation and carving. Colour and position of face suggests virtue; headdress, batik, arm ornaments, and position of hands, and particularly gold skin indicates high nobility. Character possibly a slight variation of Salya or Parikesit. Differs in hair (only kendit), and white face. Headdress matches.

Holding Institution
MOA: University of British Columbia
Made in
Indonesia