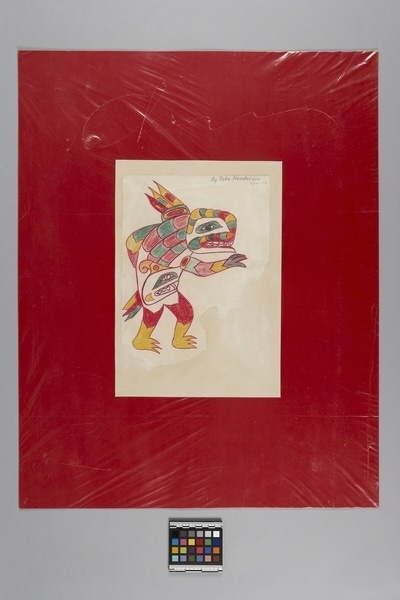 Stylized, standing figure, facing right with an ovoid head, crest or wing-like appendage at the top, forelimb with three digits is extended to the right side, and yellow and red legs, each with three digits, at the bottom. There is a profile face in the lower body. Otherwise mainly covered in red, yellow or green u forms. In blue ink and pencil, at the top right, there reads 'By John Henderson age - 13'. The drawing is on a vertically rectangular, white paper piece glued to white paper, then a red cardboard all in the same orientation covered with clear plastic.

From a collection of Northwest Coast inspired artwork produced by First Nations children at the Alert Bay Residential School during the 1968 to 1969 school year. The works were also part of an exhibition of student drawings, displayed at the Charles Sanderson Library in Toronto during 1970. They were also featured briefly by a local television station. Residential schools were operated by religious organizations and followed the regular provincial curriculum. The Alert Bay Residential School was operated by the Anglican Church of Canada. According to the Van Drielens, art was discouraged at the School because 'they couldn't make a living at it'.