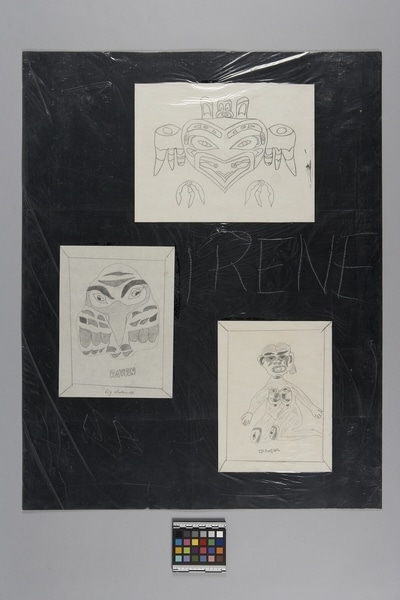 Three pencil drawings on white paper glued to a vertically rectangular, black cardboard piece and covered with clear plastic. Top drawing or tracing is a bilaterally symmetrical bird head with three-feathered wings to the sides, a three-feathered tail at the top, and three-clawed feet below on both sides. Middle drawing is a frontal bird with a long beak at the centre, three feathered wings that are folded into the body, and three-clawed feet pointing inward with a pencil line border around the image. 'RAVEN by Clarence' is written below. The bottom drawing is of a kneeling woman with arms out to the sides, u-shaped breasts, and decorations on the knees and the face that include eye shapes on the former and crescent shapes on the latter. Outlined just like the second drawing with "Tsonoqua' written below.

From a collection of Northwest Coast inspired artwork produced by First Nations children at the Alert Bay Residential School during the 1968 to 1969 school year. The works were also part of an exhibition of student drawings, displayed at the Charles Sanderson Library in Toronto during 1970. They were also featured briefly by a local television station. Residential schools were operated by religious organizations and followed the regular provincial curriculum. The Alert Bay Residential School was operated by the Anglican Church of Canada. According to the Van Drielens, art was discouraged at the School because 'they couldn't make a living at it'. The bottom drawing is copied from 'Lady Giant Dzu-nu-qwa,' a print by Chief Henry Speck (see Nb3.1405).