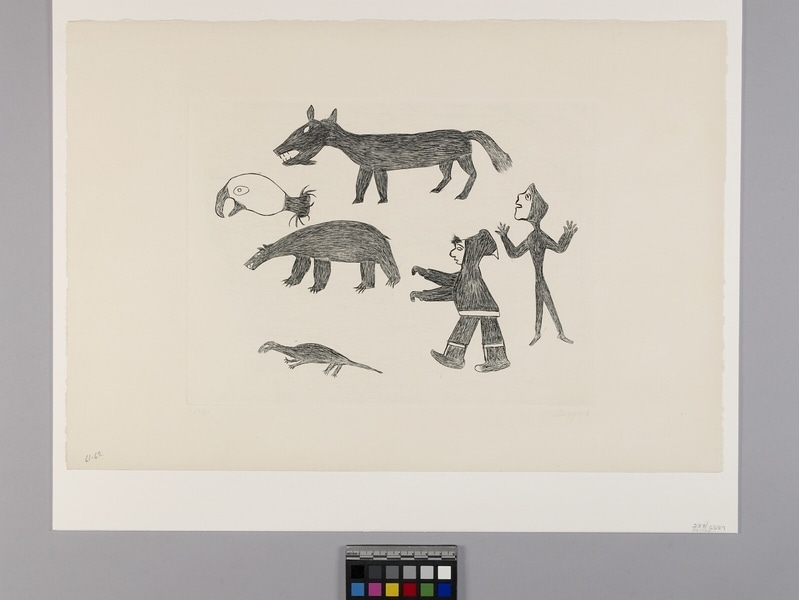 Print depicting two humanoid figures to the right-hand side, and four animal figures to the left and top. One creature has a bird's head, and another is bear-shaped. Below the image is written, "17/50 Saggiak." The Canadian Eskimo Arts Council blind embossed stamp is in the bottom right-hand corner.

The Inuit prints consist of stencils, stonecut engravings and lithographs from the communities of Cape Dorset, Baker Lake, Povunenituk, Holman Island, Pangnirtung and Clyde River. The first Cape Dorset prints were in 1959, Povunenituk in 1962, Holman in 1965, Baker Lake in 1970, Pangnirtung in 1973 and Clyde River in 1981. Since the late 1940's Indian and Northern Affairs have supported the development of art from the Canadian Arctic in co-operation with the Canadian Eskimo Arts Council. Catalogues have been published since 1959 and most of the prints are documented in their year of production. A print shop was set up by James Houston in Cape Dorset in 1958. Stonecutters Igola, Eegvudluk, Luktlak and Kanangenak began training for printmaking. James Houston decided that the co-operative would work well in the Inuit community. Specialists would prepare and cut the stone block, another artist would do the drawing and someone else would do the printing. The symbol used by the Cape Dorset group was a stylized igloo. The Cape Dorset Co-operative produces an annual catalogue illustrating and documenting prints produced within that year.