Textile Item Number: 1043/1 from the MOA: University of British Columbia 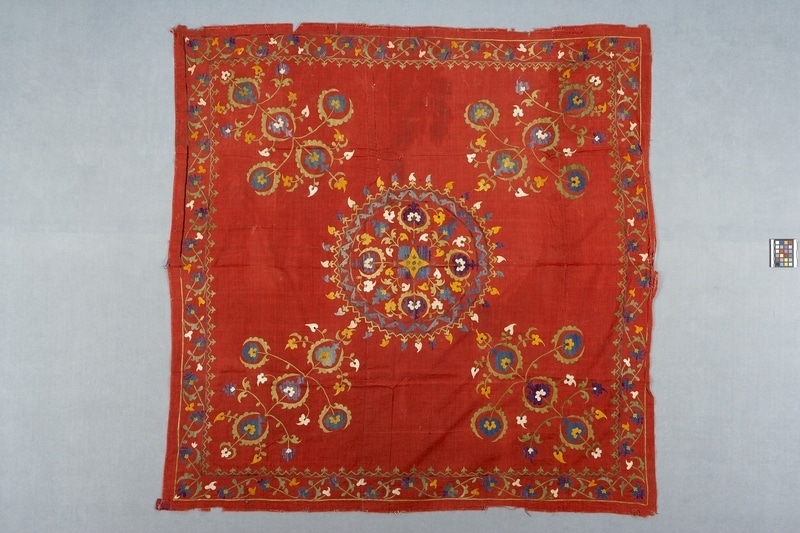 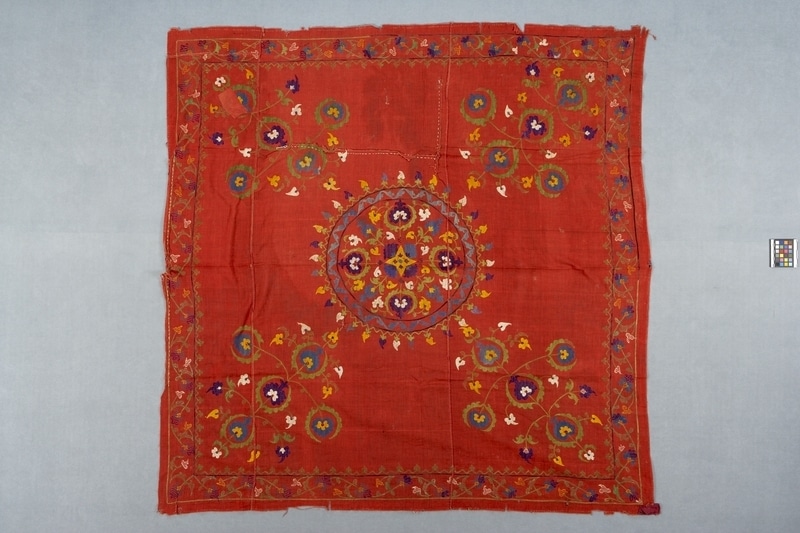 Square embroidered domestic textile, with large naturalistic floral designs stitched with silk floss in many colours on red cotton fabric. There is a large circular floral pattern in the centre and an arrangement of flowers, leaves and stems in each corner of the square. A border of meandering stems, leaves and flowers forms a frame around the outside edges of the square. The background textile was pieced together from narrow strips before the embroidered patterns were worked. The edges are, for the most part, unfinished, although needle marks along some edges indicate that an edging, such as braid or fringe, may once have been in place.

Probably a wall hanging, a cover for a table or a pile of bedding, or a curtain to hide storage areas. Perhaps part of a dowry. The Uzbeks and Tajiks of Northern Afghanistan are settled rural agriculturalists and herders, whose traditions are rooted in nomadism. Many are descended from tribesmen who fled or were forced out of the arid steppe regions of Uzbekistan and Tajikistan by political unrest or resistance to political ideology and took refuge in Afghanistan. The women produce many decorative articles for the home.

Created for domestic use.

Dorothy Somerset purchased this textile from an itinerant peddler while staying in Mazar-i-Sharif, Afghanistan, as a tourist in the late 1960s or early 1970s. She reports that although she did not know the provenance of the textile, its beauty appealed to her and it seemed to be genuine folk embroidery. There may originally have been a fringe or other decorative finish on the edges as needle holes along some edges show that it was either hemmed or a finish had once been applied.