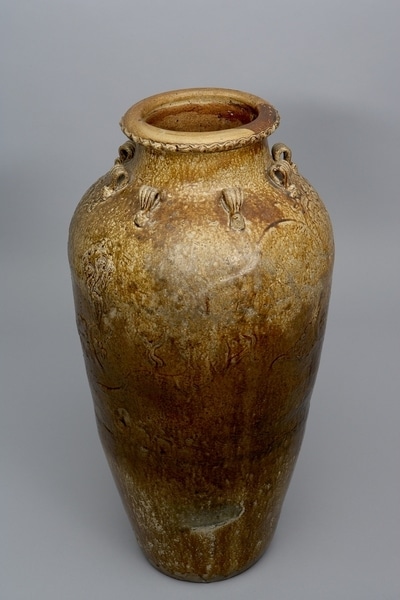 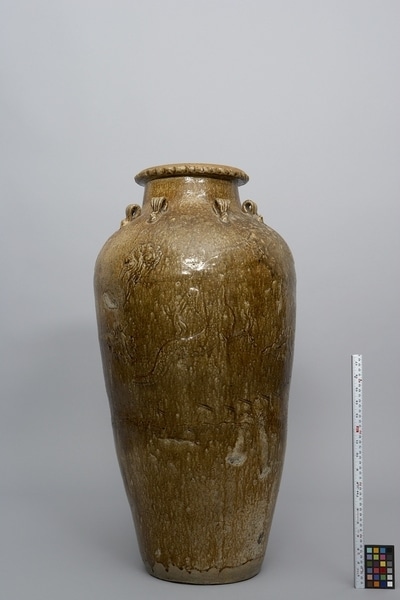 Tall elongated globular jar with wide pie-crust lips, flat base and eight vertical lugs. Two dragons with sweeping bodies and tails adorn the upper half of the body. Between the dragons are patches of floral? motifs. Just below mid-body is a slight ridge. Just above the ridge is a row of incised parallel slants. The lugs are grooved and have dao die mask designs. Kiln defects with the largest measuring about 11 cm. towards the base. The body glaze stops just short of the base. A set of inked numbers on the lip.

Probably hand-built with clay rings of varying sizes. These were fused together by holding a mallet with a convex face against the inside surface of the jar and tapping gently with a concave mallet held against the outer surface. The upper and lower sections of the jar were probably made separately and then luted together as evidenced by the ridge.

In many indigenous groups of the Philippines, supernatural power was attributed to Chinese ceramics because of the ringing sound emitted when lightly tapped and their vitreous, shiny glazed surfaces which impart an impermeable quality. The ringing sound was seen as a magical voice able to attract the attention of powerful ancestor spirits. Their impermeable and seemingly imperishable surfaces were believed to have great protective power against all kinds of influences, from evil spirits to poisons (Langrick, p. 55-56). While the dragon is a traditional Chinese symbol embodying the yang or male principle and emblematic of good fortune, it is also associated with the mythical Naga serpent by the peoples of Southeast Asia. Dao die is an animal mask motif of ancient Chinese origin. The animals depicted vary from dragon, feline, bovine, and indeterminate.