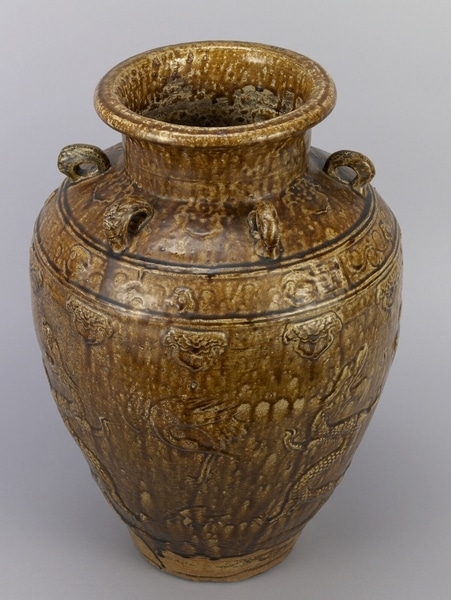 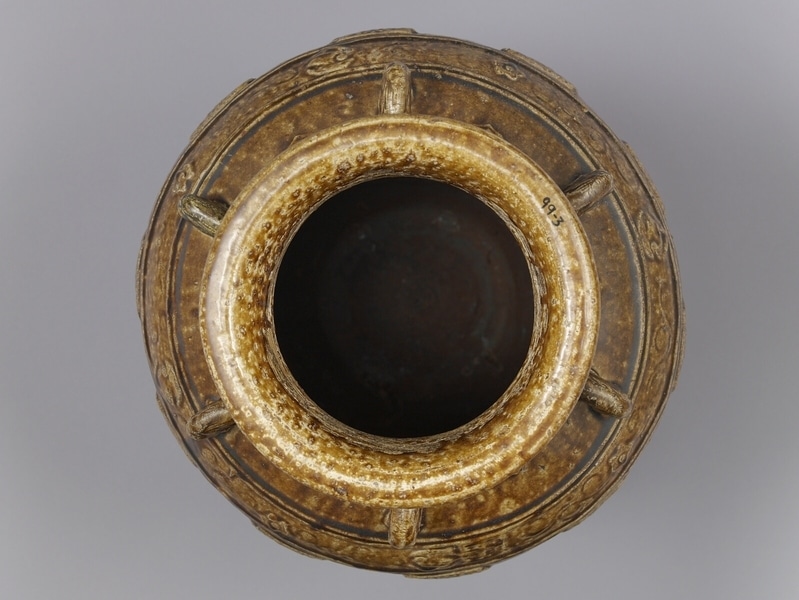 A tall round jar with wide mouth and six vertical lugs on the shoulder. The body design is of two pairs of vertical s-shaped, three-toed dragons. Each pair has a flaming pearl on a cloud between them. The dragon pairs are separated by cranes and swallows. The shoulder of the jar is ringed with three bands of floral patterns two of which are variants of the ruyi motif. The jar is glazed from the interior neck, over the rim and down the body until just short of the base. The lip has a set of inked numbers.

In many indigenous groups of the Philippines, supernatural power was attributed to Chinese ceramics because of the ringing sound emitted when lightly tapped and their vitreous, shiny glazed surfaces which impart an impermeable quality. The ringing sound was seen as a magical voice able to attract the attention of powerful ancestor spirits. Their impermeable and seemingly imperishable surfaces were believed to have great protective power against all kinds of influences, from evil spirits to poisons (Langrick, p. 55-56). While the dragon is a traditional Chinese symbol embodying the yang or male principle and emblematic of good fortune, it is also associated with the mythical Naga serpent by the peoples of Southeast Asia. Dragons frequently occur in pairs with each chasing a round object variously interpreted as sun, moon, pearl or the yin yang emblem. In Chinese culture, the crane is emblematic of longevity as is the ruyi said to be derived from the ling chi or sacred fungus of Im.