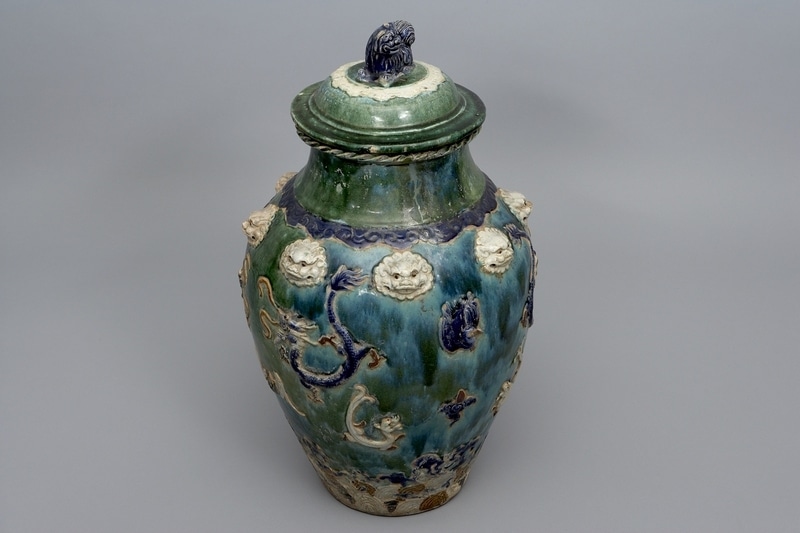 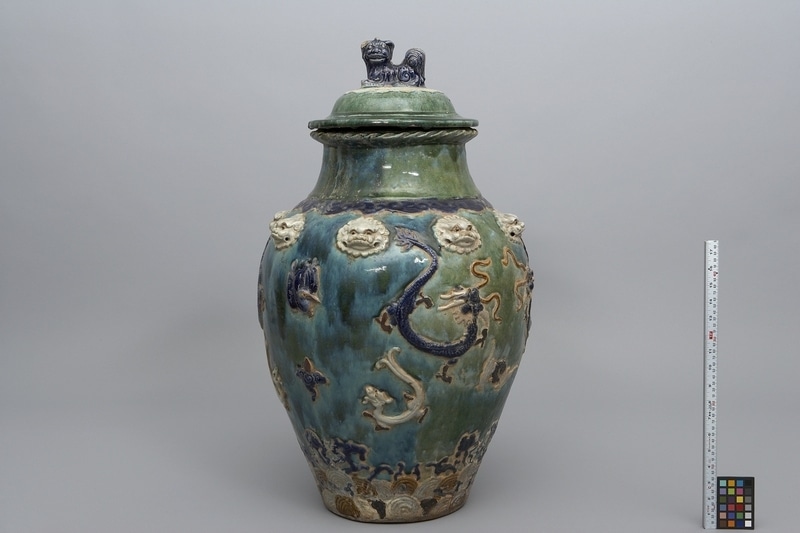 A heavily potted, tall, globular jar with a wide flat base and a lid which is crowned with a moulded seated lion. The jar has eight lugs in the shape of lion heads on its shoulder. Two pairs of blue dragons with sweeping tails and prominent feelers adorn the body. The dragons face each other and each pair is separated by a crane. Just under these dragons are two other pairs of grey dragons with a flaming pearl in between them. The base design is a commingling of wave, floral and scallop motif. Both the jar neck and lion on the lid is ringed with a version of the ruyi motif. The outer edge of the lip is incised with slanting parallel lines which gives a twisted rope effect.

Probably exported from China via the Burmese port of Martaban from which the generic name for large jars is derived. These pot-bellied jars were designed for long journeys at sea, with lugs big enough to pass a rope through and as containers for food, oil and water as well as for packing smaller porcelains. They are also referred to as dragon jars because they often have a moulded dragon decoration on their sides. These jars were important trade items in south east Asia during the song and Ming dynasties. Besides China, Martaban jars were also manufactured in other parts of Southeast Asia such as Burma, Cambodia, Thailand and Vietnam and are still being manufactured today in certain parts of Asia.

From a collection of about ten Martaban (or dragon) jars brought by an itinerant Indonesian peddlar to Hugh Moss Limited in London in 1976 and subsequently acquired by the donors.

The dragon is a divine animal embodying the yang or male principle and is emblematic of good fortune. Dragons frequently occur in pairs with each chasing a round object variously interpreted as sun, moon, pearl or the yin yang emblem. The crane is emblematic of longevity as is the ruyi said to be derived from the ling chi or the sacred fungus of immortality. In Buddhism, the lion is defender of law, protector of sacred buildings and emblematic of bravery and energy.