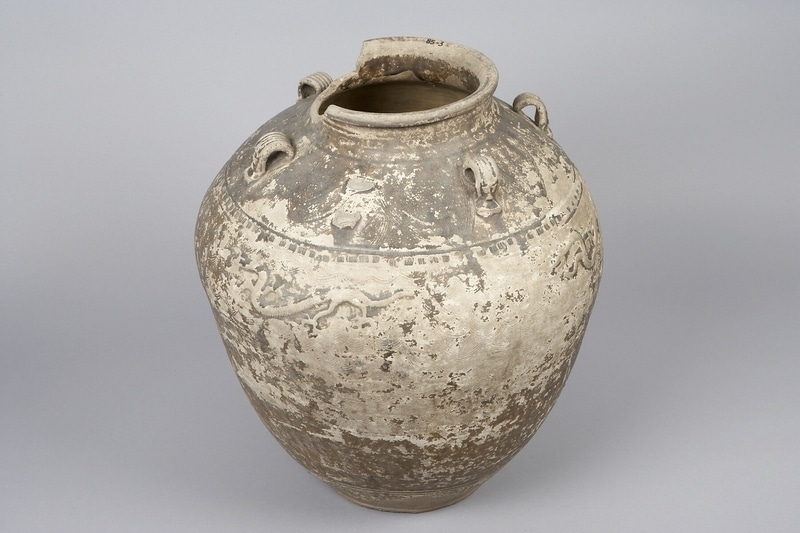 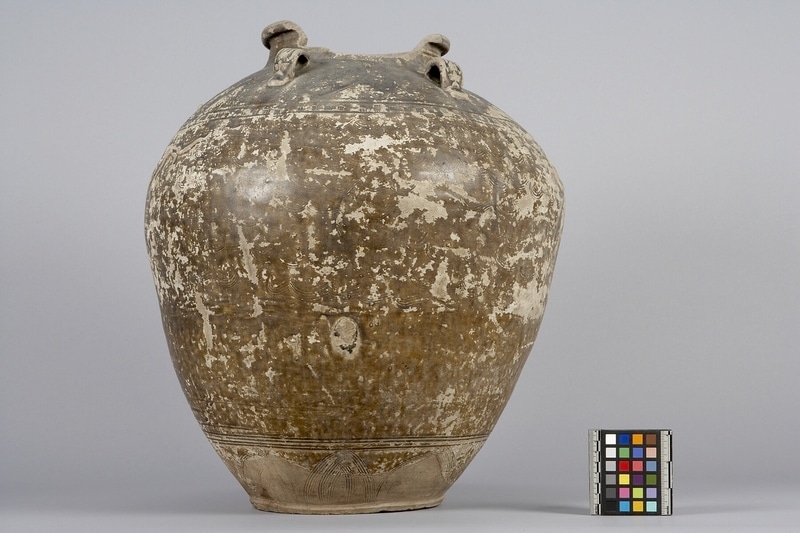 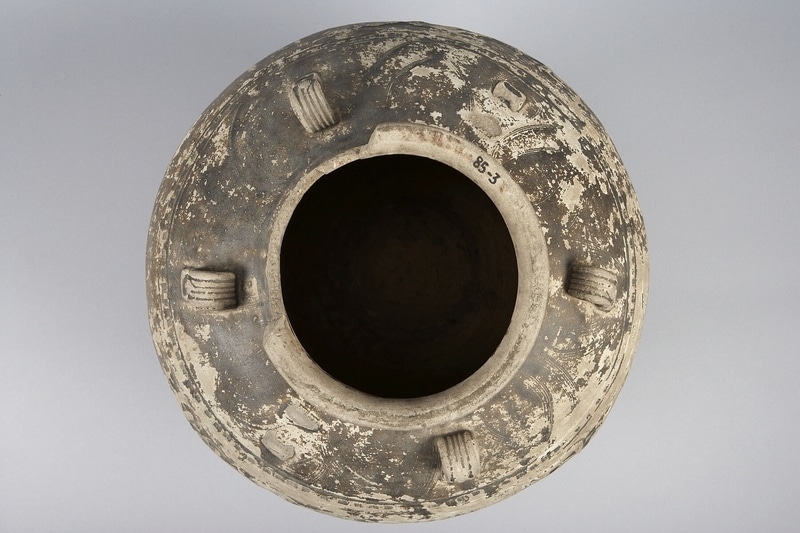 Large globular shape jar with wide mouth, short neck and four vertical lugs on the shoulder. Each lug is grooved and has a simple dao die mask design. Just under the lugs is a narrow band of tyre track-like motif and three horizontal dragons amid waves. There are two borders of lotus on the shoulder and base. The lip has a set of inked numbers.

Chinese ceramics were important trade items in Southeast Asia during the 11th - 16th century C.E. This jar was probably exported from China to the Philippines via the Burmese port of Martaban from which the generic name for large jars is derived. They are also referred to as dragon jars because they often have a moulded dragon decoration on their sides. These pot-bellied jars were designed for long journeys at sea, with lugs big enough to pass a rope through and as containers for food, oil and water as well as for packing smaller porcelains. Besides China, Martaban jars were also manufactured in other parts of Southeast Asia such as Burma, Cambodia, Thailand and Vietnam and are still being manufactured today in parts of Asia. Due to their physical characteristics - resonance, vitreosity and durability - Chinese ceramics became fully integrated with the ideology and ritual in Philippine societies and played an important role in all aspects of cultural life (Langrick, p.61). Their functions were varied and included utilitarian, ceremonial, religious roles, as heirlooms, in mortuary ceremonies as burial goods and as items of prestige. Treasured for their supernatural powers, large jars were considered to harbour spirits or household gods while some spoke prophesying events. As mortuary objects ensuring adequate protection of the departed soul, large jars have been found as grave goods, in inhumation burials where bodily remains are encased and in cremation burials where ashes of the dead are placed.

In many indigenous groups of the Philippines, supernatural power was attributed to Chinese ceramics because of the ringing sound emitted when lightly tapped and their vitreous, shiny glazed surfaces which impart an impermeable quality. The ringing sound was seen as a magical voice able to attract the attention of powerful ancestor spirits. Their impermeable and seemingly imperishable surfaces were believed to have great protective power against all kinds of influences, from evil spirits to poisons (Langrick, p. 55-56). While the dragon is a traditional Chinese symbol embodying the yang or male principle and emblematic of good fortune, it is also associated with the mythical Naga serpent by the peoples of Southeast Asia. Dao Die is an animal mask motif of ancient Chinese origin. The animals depicted vary from dragon, feline, bovine, and indeterminate. Lotus is a Buddhist symbol representing purity and perfection.