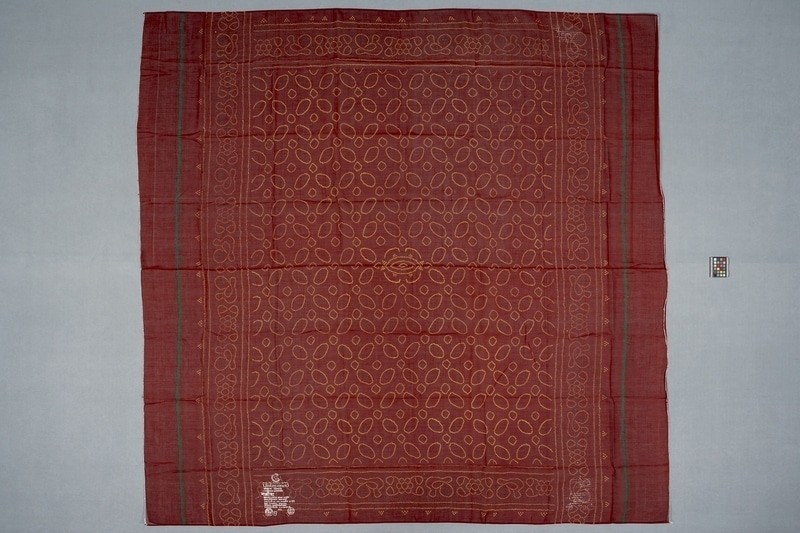 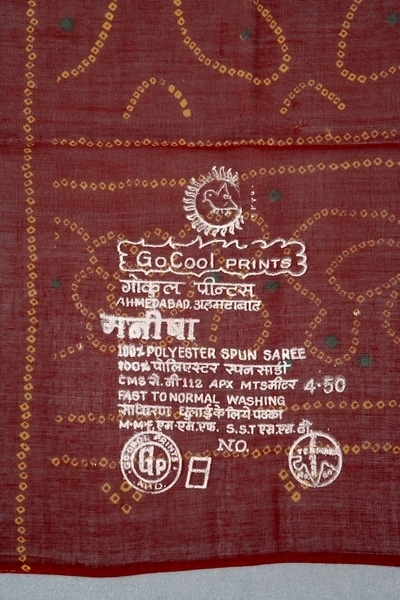 Burgundy-coloured women's head cloth, hemmed on one side and machine-edged with white thread on another. Cloth has a green tie-died stripe on two sides and abstract decorative patterning made with tiny orange squares on the body of the cloth. Maker's mark in two places (see file).

Headcloths of this type were worn by women of the Hindu Koli caste. Members of that caste assisted in the production and gathering of this clothing. The cloth for the clothing was purchased in Kodinar town, 7 km. to the east of Dhamlej. They were worn with elaborate blouses, which were also worn by other castes, and solid-colour skirts. Koli women also wore distinctive jewellery, including small bracelets called bangli in Gujarati made of plastic or gold, silver ankle chains called chhdi, solid silver anklets called sakada, and large gold nose rings called kadi.

This head cloth was collected with the help of Hindu Koli people. This collection was gathered with the enthusiastic participation of villagers in Dhamlej, reflecting Derek Johnson’s rapport with them. They allowed him to take photographs of them demonstrating how the clothing is put on and worn. These photographs are available in the Museum of Anthropology collection documentation file for accession 2615.

The type of clothing helps to communicate the caste of the wearer.