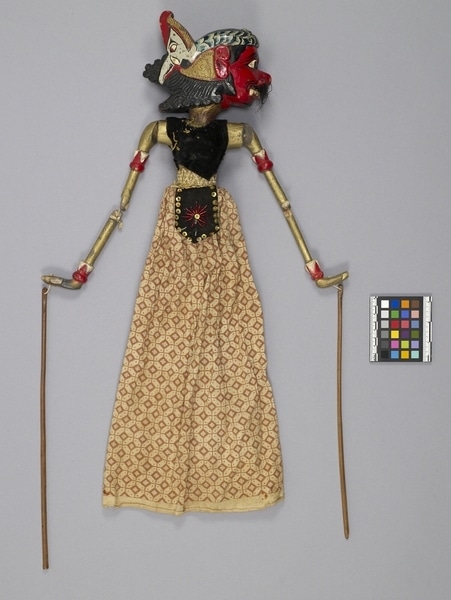 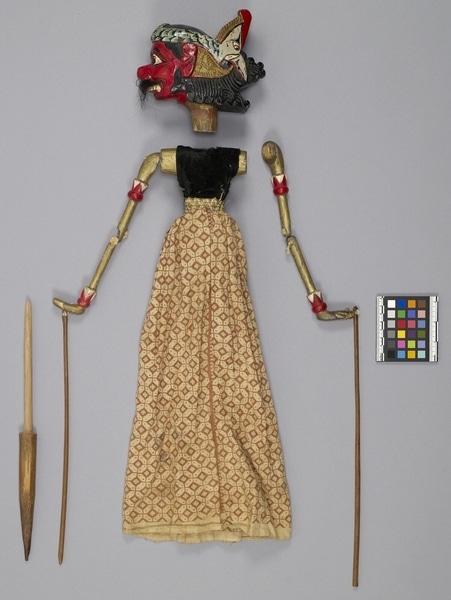 Three-dimensional male humanoid puppet: large head (part c) fits into gold painted body with skirt (part a), and a control rod (part d) with a long shaft passes through the body and fits into the neck of the figure's head. The body has jointed arms, each with a long controlling rod attached, and the figure's right arm (part b) has become detached. The figure has a dark pink face, a blunt nose; white eyes have dark red pupils. White protruding upper teeth with fang at each corner of mouth; black hairy moustache, painted beard. Headdress consists of black cap, blue-striped scarf around forehead, gold triangular sumping (ear ornament) behind ear and grey Garuda (mythical bird) above grey fringe of curls. Torso painted gold and covered with black velvet cloth. A black velvet apron is sewn to the waist with red glass beads in sun ray design and a band of woven gold thread and ribbon at waist. The figure is wearing a beige cotton with brown geometric batik design. Red and white carved bracelets at upper arms and wrists; hands upturned.

Javanese puppetry as an art form probably developed by the 11th century. The three-dimensional wooden wayang golek puppets of western Java, which are to be distinguished from the earlier and more sacred wayang kulit shadow plays puppets or other forms, appeared during the 16th century. Originally the plays depicted Javanese mythology, but after the Indian conquest of Java the Hindu epics, Ramayana and Mahabharata, were incorporated into the cycles, which comprise about 200 plays. An individual or group hires a dalang (puppet-master) to celebrate important occasions. The performances often last all night and are generally presented in three acts, with vocal and instrumental accompaniment. The individual plays vary widely in detail but usually involve conflict between good and evil. They serve a moral and religious purpose, and more recently, one of political commentary. Each puppet's character is represented by its appearance and placement onstage; protagonists with strong elements of good are placed to the right, antagonists of violent or evil nature to the left. Durasana appears in the Pandawa cycle, which details the conflict between the Pandawa brothers and the evil Kurawa brothers. The cycle spans twelve generations beginning with the god Vishnu. It is based upon the Mahabharata epic. Durasana is one of the 99 Kurawas, who attempt to depose their more honourable cousins, the Pandawas. Motivated by greed and chicanery, the Kurawas are a clear example of evil beings, contrasted strongly by their good opponents. The Kurawas are eventually destroyed in the great war. Durasana is placed to the left of the puppeteer with other characters not considered noble or good.

Red face, blunt nose, red eyes and fangs are all negative features, associated with irascible and unfaithful character. Gold torso denotes a male of human descent. Arm ornaments and upturned hands show lack of refinement. Headdress of scarf, ear ornament and eagle (?) identify this puppet as Dursasana, one of the major Kurawa brothers.