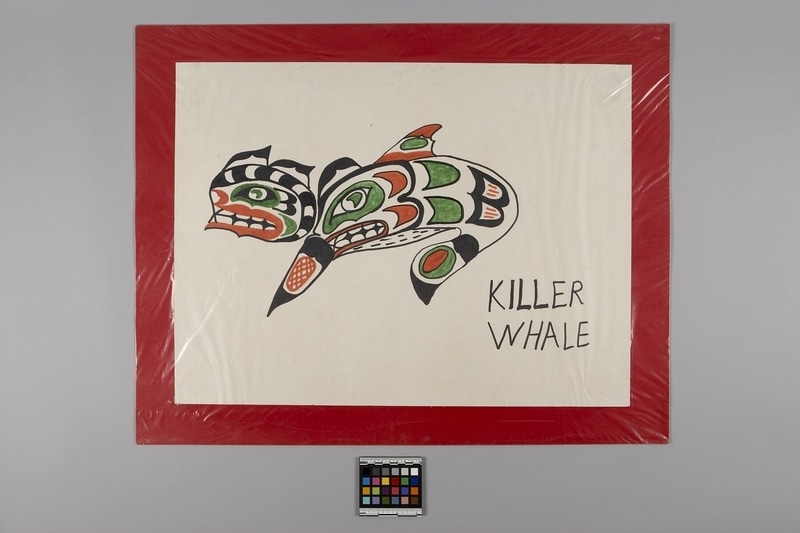 Profile, left facing, whale drawn in pencil and painted over in black with orange and green detail. Face on the body is also in profile in the same direction. Mouths are outlined in orange. The green crescent-shaped eye of the head is in a blank ovoid surrounded by a black tapering oval surrounded by a green arew with two parallel, sideways, black u forms behind. The sideways green u-shaped eye of the face in the body is in a blank circle outlined by a black tapering oval surrounded by a green area. Both faces have red mouths with teeth and front fangs. The head has a sideways split u in front of the eye with a sideways green split u behind the mouth. The face on the body has two sideways red u forms at the back. Cross hatched ovoid on the pointed pectoral fin. The belly has black dashes. The dorsal fin has red split u's above and below the central green oval. The back of the body has two sideways green u forms with two black ones that have horizontal red dashes within. The tail has a red oval in a green circle with a black-pointed tip. In black paint, at the bottom right, there reads 'KILLER WHALE'. The drawing is on a horizontally rectangular, white card glued to a horizontally rectangular, red cardboard. Covered with clear plastic.

From a collection of Northwest Coast inspired artwork produced by First Nations children at the Alert Bay Residential School during the 1968 to 1969 school year. The works were also part of an exhibition of student drawings, displayed at the Charles Sanderson Library in Toronto during 1970. They were also featured briefly by a local television station. Residential schools were operated by religious organizations and followed the regular provincial curriculum. The Alert Bay Residential School was operated by the Anglican Church of Canada. According to the Van Drielens, art was discouraged at the School because 'they couldn't make a living at it'.