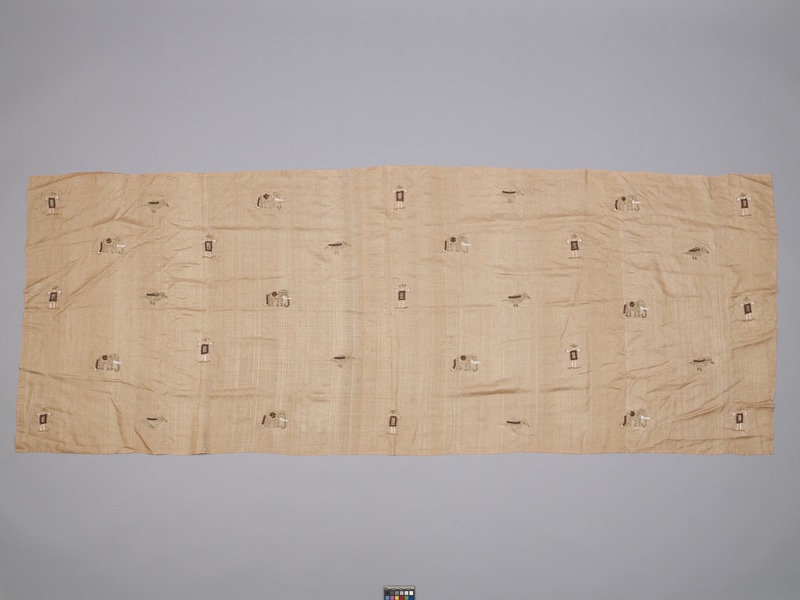 Veil, or shawl, worn with wedding ensemble (3132/2 a-b). Fabric is wild tussar silk in a light orange-brown colour. It is hand embroidered with small images of standing birds, elephants with tusks and long tails, and human figures with arms spread, in gold metallic thread, round wooden beads, and tubular glass and metal beads. The back of the veil shows the yellow and white thread used to attach the beads.

This three-piece raw silk wedding ensemble was commissioned in the 1980s by friends of the bride, Ms. C. Aiyar. Ms. Aiyar, Hindu, came from Tamil Nadu in South India, however the style of this garment is more of a northern style (e.g., salwar/chemise rather than sari), likely because she was marrying a groom from North India. The colour is also unusual, as most Hindu brides prefer to marry in bright red saris. The natural (un-dyed) colour of this material is said to be associated with renunciation and contemplation. It was chosen because the bride had lived with her parents in an ashram until she was 16 years old, when she married.

The glass and wooden beads sewn on the outfit were hand-crafted. The raw silk fabric was also hand-woven and hand embroidered. India is the second largest producer of tussar silk, which is produced by tribal groups living in the sub-tropical forested regions.