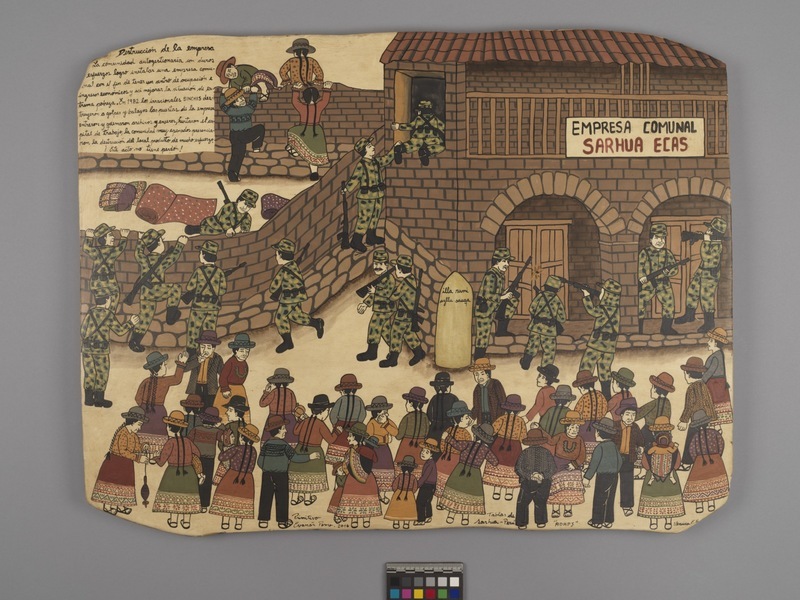 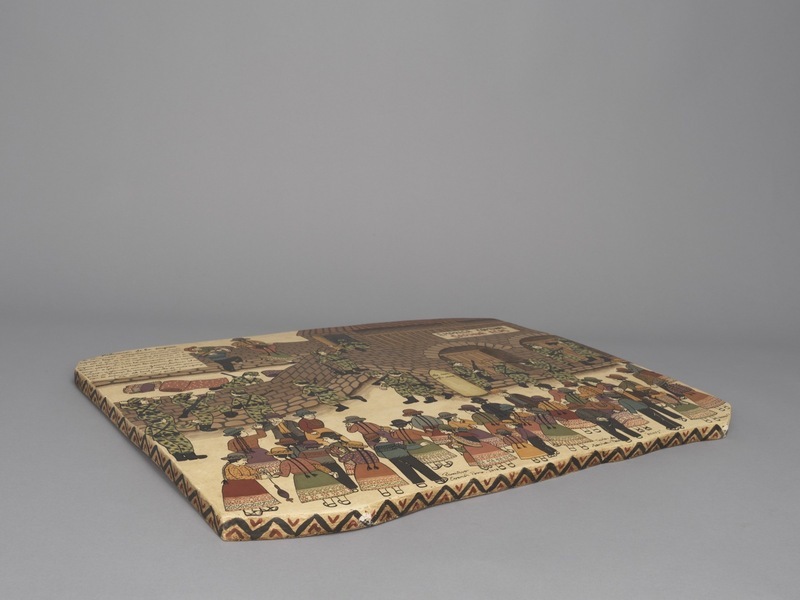 Wooden panel covered in plaster or gesso and painted. Tabla shows men in military camouflage, raiding the Empresa Comunal de Sarhua, the community centre at Sarhua, which held community records and cultural knowledge. The image also shows residents from Sarhua (‘Shining Path’ supporters?) climbing a fence to escape the State military - known as Sinchis. The people watching the destruction of the Empresa Comunal are visibly shocked and saddened. They argue amongst themselves. US trained Peruvian counterterrorist police are shown looting and destroying the autonomous community building at Sarhua.

Destruccion de la Empresa (Destruction of the Community Centre) from the series ‘Piraq Causa’ (Quechua; Who is to Blame?). Number 2 in the series. A new painting format, executed on rectangular boards, was used to document the “times of danger” that resulted in the death of many Indigenous inhabitants of Ayacucho in the 1980s. The tradition of testimonial painting in Sarhua was radically transformed during the armed conflicts involving the Maoist ‘Shining Path’ movement and the State military. The Piraq Causa series denounces the human rights abuses committed by both guerrilla members and the state military. In some cases, these pictorial documents strategically exclude certain elements of the narrative, such as the hammer and sickle (showing people’s initial sympathy for the communist revolutionaries). Absences have emotional nuance in that they give expression to traumatic gaps in Sarhuino history. According to Primitivo and his family, by the time the conflict had escalated, it was unclear who the attackers were (Sinchis dressed as Maoists and the other way round), all vying for allegiance and information. Following these ‘times of danger,’ many Sarhuinos left rural Ayacucho, in many cases for Lima. As a result much of the tradition and knowledge behind this painting tradition is being lost.

Reproduction of an original tabla (painting) by the maker's father, Primitivo Evanán Poma.