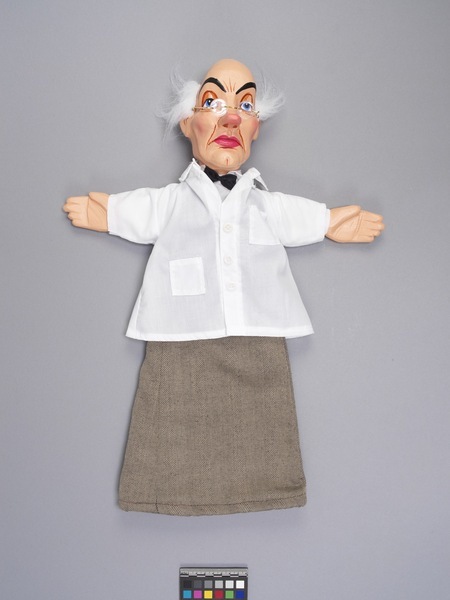 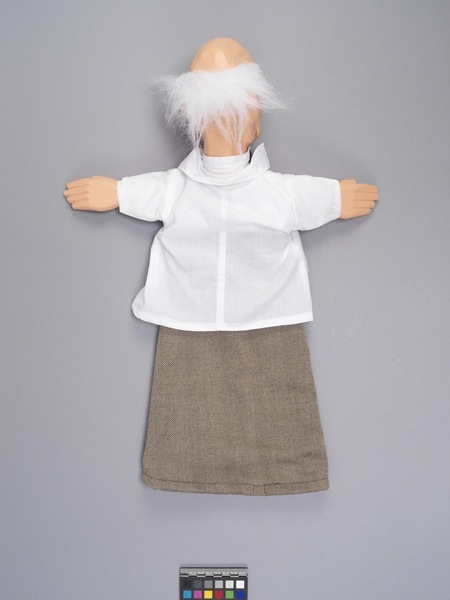 Hand puppet of the Doctor character, from a Punch and Judy puppet show. Head and hands carved from wood. Components painted beige. Character has long, thin nose and prominent jaw. Nose and cheeks are rosy. Lips are light pink and eyes are light blue. Small red dots in the corners of the eyes. Character has large black eyebrows. Dark brown lines on face highlight nostrils, mouth, chin, ears, furrowed brow, eyelids and under eye area. The Doctor has a ring of white, fuzzy hair glued around his head and is wearing circle eyeglasses. The gold frames are nailed into his head. Character is wearing a white doctor’s coat, with two chest pockets, overtop a dark green vest with vine patterns. Vest is overtop a grey, striped fabric body. Above vest, attached to fabric body, is a black bow tie. Metal ring along bottom edge of body opening. Operated by inserting hand inside the body of the puppet to control the head and hands.

Brian Davey first draws a layout grid and outlines the contours of the puppet’s head on a block of lime (linden) wood. He then carves it out using a combination of electric band and hand saws. For the hooked nose and pointy chins, he carves these features separately from oak wood and then attaches them to the lime wood head with a mortise-and-tenon joint. After sanding the puppet’s head by hand to a smooth and silky finish, Brian paints it with a primer and several layers of acrylic gesso before airbrushing on the pinkish flesh colour and adding red highlights. For other features such as the brows, eyes and mouth he uses a paintbrush and layer of acrylic paint.