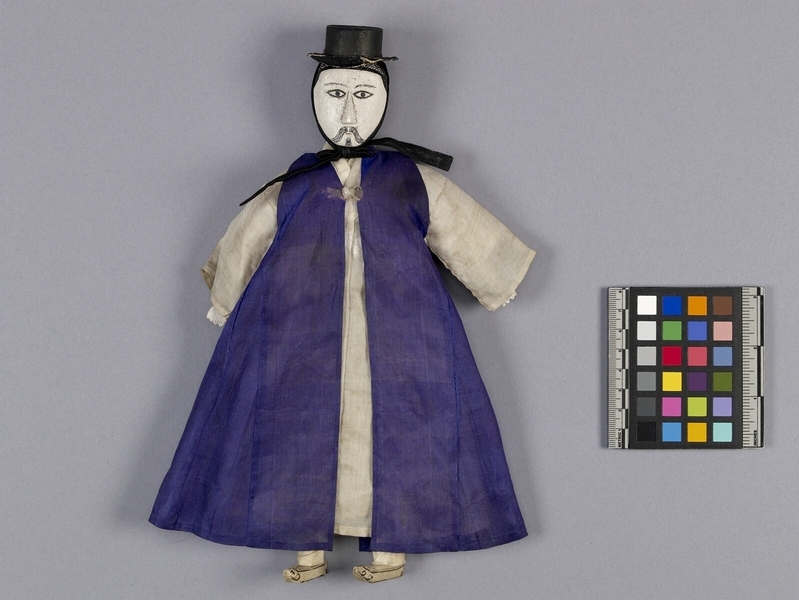 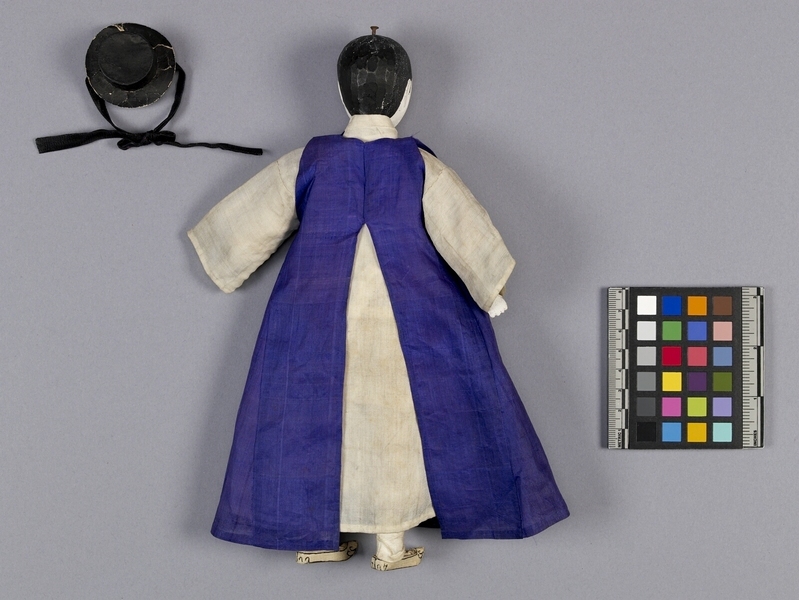 Doll (a) representing a male figure carved out of wood with articulated shoulders and ankles. His face and hands are painted white with painted black hair, eyebrows, eyes, a drooping moustache and a chin beard. He wears a separate black paper hat (b) with a narrow brim and black silk ribbons that tie in a bow under his chin. A nail at the top of his head helps keep the hat in place. He wears a long sleeveless blue silk vest, gored and pleated under the arms, and fastened with a dingle button over a gored long-sleeved white silk coat fastening with ribbons tied in a single loop. Beneath this are an under-jacket with blue ribbons tied in a single-loop bow and under-trousers. His ankles are wrapped in white material, and he wears pointed shoes made of paper (?) covered with white cloth and painted with black linear and looped designs at the front and back.

Doll is a member of a family of dolls (see N3.60 a-b, N3.61, N3.63 and N3.64). It is likely that this set of dolls was custom-made for presentation to foreigners. They show typical Korean clothes, which were made with accurate detail of form, material, and technique for these dolls. This doll has attributes of a married member of the upper class of officials and former officials, from the period after 1884. After 1884, clothing reforms were instituted in which such men were expected to wear narrower sleeves and narrower hat brims. Official’s formal wear outside of the court included the blue outer garment, called “jean-bok” or “dab-ho”, which normally was tied with ribbons, and a white robe called “doo-ru-ma-gi”, which before the revolution had a slit and an additional panel at the back. The blue garment had underarm pleats for comfort. Members of this class wore shoes of this shape and decorated in this way, called “tae-sa-hae” in daily life. They were made of leather or satin. In court they wore boots. Under the outer garments they wore a short white jacket “chogori” with a blue tie and trousers called “paji”. Below the trousers, and over their socks, they wore ankle wrappings called “hang-jeon”. Their hats, called “gat”, were made of horsehair or split bamboo, lacquered black. This doll is lacking the additional hat-cord strung with beads normally worn with the hat “gat”. Their uncut hair was worn in a knot contained inside the hat. Their beards were carefully arranged, and were a man’s only cosmetic treatment.

Doll represents the father in the family of dolls. The outer clothing indicates that the doll was part of the yangban class, the highest social class during the late Chonson Dynasty. The former slit at the back of the white robe reflected its origin as military clothing suitable for horseback.

All the clothing is hand-sewn. The edges are finished by pasting, and the hems are fixed with running stitches.