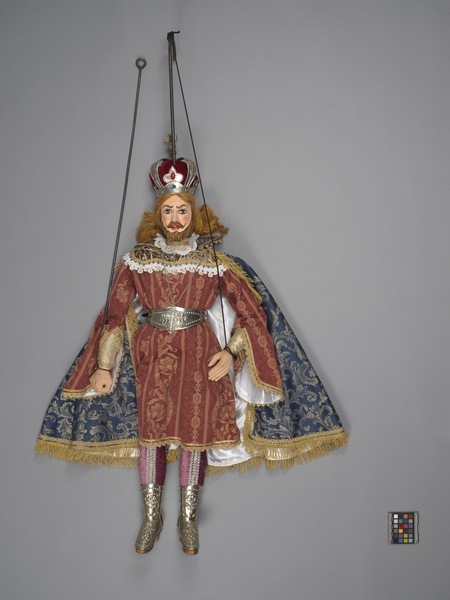 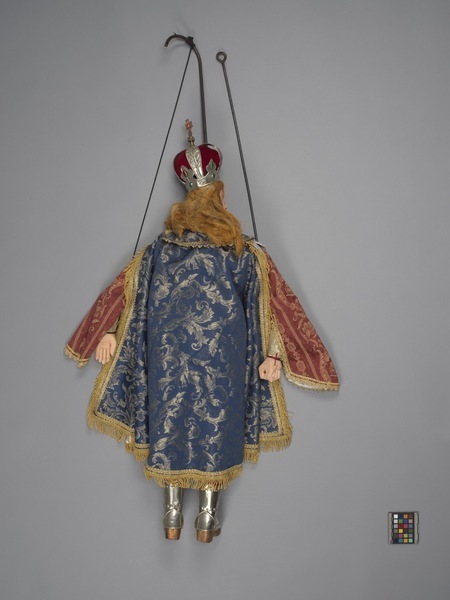 Opera dei Pupi puppet of the character named Carlo Magno (King Charlemagne). Three-dimensional marionette carved of wood (part a) with detachable head (part b) mounted on a long, hooked metal rod. He wears a burgundy and gold tunic, purple-red velvet leggings, and a dark blue with gold brocade cape with a gold fringe. He also wears a silver metal belt, silver ankle guards, and a silver crown with deep red velvet underneath four arches, and surmounted by a small brass(?) globe and copper(?) cross. The crown is decorated with set glass(?) stones. His chest is embellished with a shiny woven textile, adorned with applique, sequins and looped-fringe, topped with a silver-coloured necklace with bejeweled cross (part c). The left wrist has a length of black cord tied to it, and the right hand is clenched in a fist, with a hole for an accessory to be inserted through. A metal rod with an eye hook at each end is tied to the right wrist. There is a metal band across the bottom of each heel. The body is jointed at the elbows, shoulders, and hips – with limbs held together by fabric underneath his outfit.

Puppet (Opera dei Pupi) representing Carlo Magno. Opera dei Pupi is an internationally recognized form of marionette theatre from Sicily. Originating in the early 1800s, Opera dei Pupi is based on medieval romances and epic stories of King Carlo Magno (Charlemagne, 742-814 CE) and his Christian knights, who defended Europe against pagan and Islamic forces. The plays involve pomp and ceremony, unrequited love, violent battles and the death of puppets, as glinting swords clash, shining armour rings, bodies split and heads tumble. One example of a scene on stage is Orlando Furioso, which is based on the Italian epic poem by Ludovico Aristo, published in 1516. It shows King Carlo Magno calling forth his faithful knights, including the brave female knight, Bradamante, in preparation for battle. One at a time, he calls their names and sings their praises. On the edge of the scene lurks the villainous Agricane, King of Mongolia, who has captured Princess Angelica, whom Orlando loves.