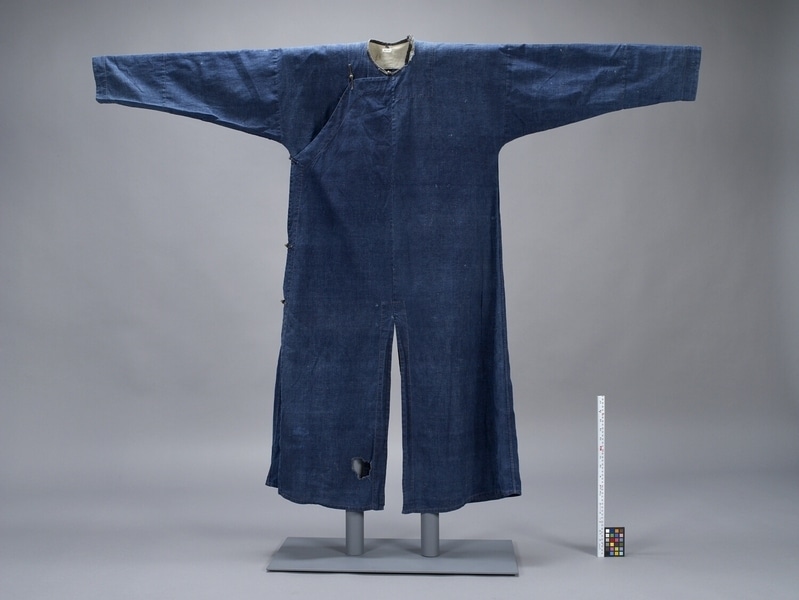 Dark blue robe with rounded neck, slender sleeves and side opening with brass frog closures. There are slits in the front and back. The inside is unlined.

Such costumes are unusual in the context of Cantonese opera, in that they represent ordinary people and are made in the style of actual clothing of the time. They might represent low-ranking military officers, and might be worn with a vest emblazoned with the character “yang”, “brave”. They also might represent a person of low status, such as a farmer, peasant, or ordinary citizen. Such garments normally would be worn with trousers.
The style of most Cantonese opera costumes derives from clothing of the Ming Dynasty, with the exception of some costumes that are specific in style to clothing of the Qing Dynasty, for operas set in that dynasty. Ming Dynasty style costumes are used for operas set in all other dynasties. In Cantonese opera, the standards for indicating particular role types and character types through costumes were and are not as strict as those for Beijing opera, and the use of symbols appears to have been inconsistent. The performance style of Cantonese opera is also much more flexible than that of Beijing opera, and change and novelty were and are valued. This is reflected in the costumes. It was important that robes and headdresses be appropriate to each other, but the footwear was less strictly controlled.
Early in the twentieth century there was a multiplicity of role types, but the number of role types was simplified over time, and some were merged. More than one actor can play a particular role type at any one time, and they are ranked. A basic list follows, but more role types exist. Among the female role types are those who can fight (called “fa daan”). The highest of these can sing, and is called the ”jing yahn fa daan”. Another female role type is the “ching yi”, a gentlewoman, sometimes humble and struggling, who sings but does not do acrobatics and fight. A third female role type is the old woman “louh daan”. A fourth is the female clown “neuih chauh”. Male role types include the “siu saang” (young gentleman), “mouh saang” (military man), “fa mihn” (painted face, military man with less education), “sou saang” (bearded gentleman, older civil male), “jung saang” (mid-rank male with many skills, but not outstanding), and “chauh saang” (male clown). Costumes are specific to general role type and often to character type, but rarely to the specific character. They are divided into civil and military types, as indicated by their sleeves. Civil costumes have wide sleeves, while military costumes have tight sleeves. Other details such as colour indicate the role type and character type. As indicated by this collection, “water sleeves” “seuih jauh” were rarely used in the pre- World War II period. Many costumes conform to named types, such as “yuhn lehng” “round neck” and “hoi ching”, scholar’s long robe overlapping at the front, with wide sleeves.
Male and female role types can be played by either men or women, depending on their abilities and attributes. In the past, troupes were all-male, but later all-female troupes and mixed troupes were formed. Mixed troupes were accepted in the overseas Chinese context before they were accepted in China.
Costumes from the period before World War II can be dated in part by their ornamentation. Those decorated with silver-coated brass disks are likely to be the oldest, followed by those decorated with mirrors. Sequins came into use in the 1930s, although they had been used sparingly before, and heavily-sequined costumes came into use in the late 1930s, continuing into the 1950s.
The conditions of production of costumes pre World War II are not known with certainty. As most costumes have repeated motifs, some method must have been used to replicate them for embroidery and couching. This work was probably done on a putting-out basis under the auspices of the production company, by women. The final finishing may have been done by men in the company headquarters.

Blue fabric appears to be hand-woven. Seams are machine-stitched with large stitches. Gores are inserted on both sides from waist down.

A large group of Cantonese opera costumes, musical instruments, props, trunks, and stage fittings was left with the Jin Wah Sing Musical Association, apparently by some of the many itinerant troupes visiting Vancouver to perform in the Chinatown theatres in the pre World War II period. There is no certain knowledge of why these materials were not taken back to China by them. They were used by the Jin Wah Sing Musical Association in their performances until they became too dated. The association continued to preserve them carefully, storing them in their headquarters and in the basement of the Chinese Freemasons building until several groups of materials were sold and donated to the Museum of Anthropology.

The blue colour and cotton fabric indicate that this costume represents an ordinary person of low social status. The narrow sleeves indicate that he was a military character or manual worker.