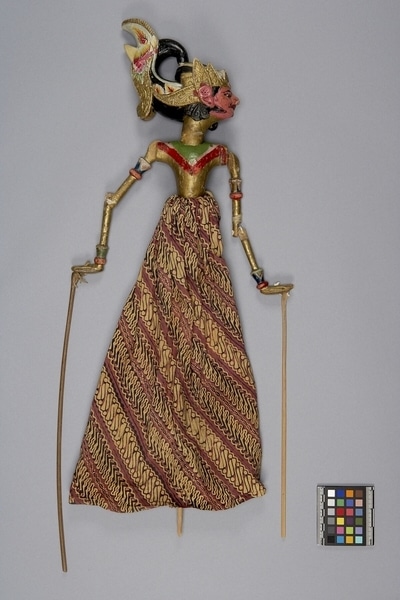 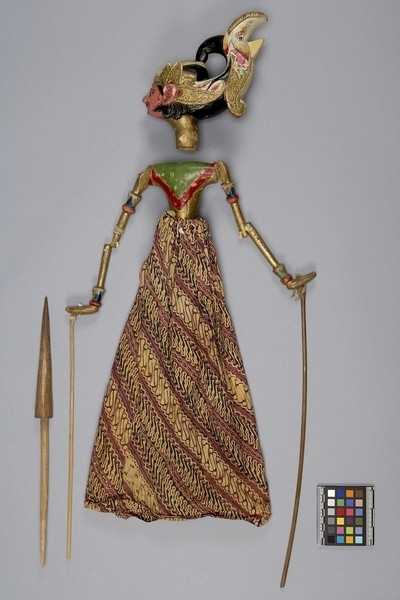 Three-dimensional male puppet: large head (part b) fits into body with skirt (part a), and a control rod (part c) with a long shaft passes through the body and fits into the neck of the figure's head. The body has jointed arms, each with a long controlling rod attached. Head bears gold crown with long sumping over black curly hair. Above protruding siyang jawi is a Garuda Mungkur with long utah-utah. Skin on body painted gold; face, with narrow slit eyes, short wide nose, small band small black moustache extending past mouth, is painted red. Dimunitive beard on chin joined to sideburns below each ear, decorated with six lines extending from a point. Large half-flower diadem lies on the headdress above the forehead. Torso painted gold and decorated with a green triangle on chest underlined with red. Long arms, attached with string at the shoulders, have bird-type ornaments on upper arm and wrist; ornament to to left is green, to right blue with yellow and green pattern. The cotton skirt is batiked in gold, purple and black.

Javanese puppetry as an art form probably developed by the 11th century. The three-dimensional wooden wayang golek puppets of western Java, which are to be distinguished from the earlier and more sacred wayang kulit shadow plays puppets or other forms, appeared during the 16th century. Originally the plays depicted Javanese mythology, but after the Indian conquest of Java the Hindu epics, Ramayana and Mahabharata, were incorporated into the cycles, which comprise about 200 plays. An individual or group hires a dalang (puppet-master) to celebrate important occasions. The performances often last all night and are generally presented in three acts, with vocal and instrumental accompaniment. The individual plays vary widely in detail but usually involve conflict between good and evil. They serve a moral and religious purpose, and more recently, one of political commentary. Each puppet's character is represented by its appearance and placement onstage; protagonists with strong elements of good are placed to the right, antagonists of violent or evil nature to the left. Utara joins the other Pandawa brothers in their conflict with the evil Kurawas, a theme derived from the Mahabharata cycle, and one of the most commonly performed set of plays. As a noble warrior, he is central to the ritual struggle between good and evil, with battles and confrontations testing the nobility and individual qualities of such characters. Utara's virtuousness and skill in warfare are therefore related.

Refined facial features, profile, and dress are traits associated with noble (alus) disposition and high birth. Headdress with Garuda Mungkur and long utah-utah represent Garuda, a mythic bird of the Hindu tradition; indicates association with the gods. Flower diadem serves the same purpose. Red face contrasts puppet's gold skin: skin colour indicative of alus, red shows violent and forceful tendencies, commonly found with evil characters. However, in this configuration it suggests passionate fury, befitting a great warrior. Puppet represents Utara, general of the Pandawa army, who fought against the Kurawas and was killed by their commander, Bisma, in the Bratayadu War. Utara is the son of King Matswapati and the goddess, Dewi Sudesna in the Mahabharata cycle.