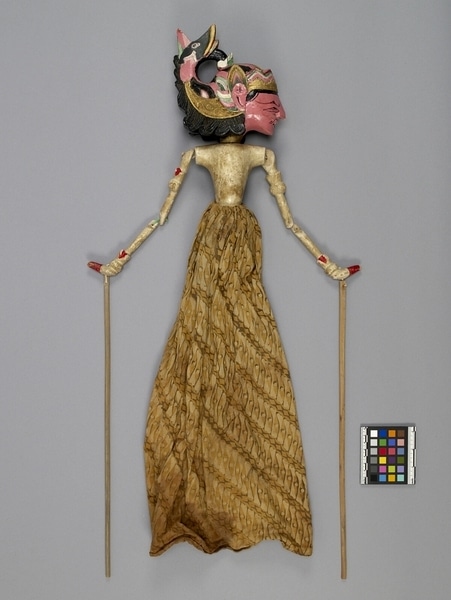 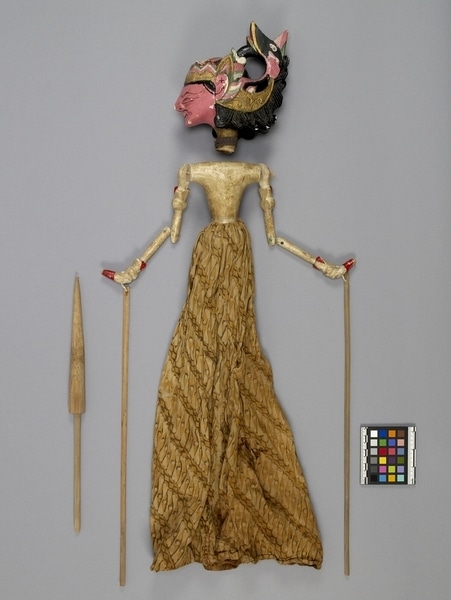 Three-dimensional male humanoid puppet: large head (part b) fits into body with skirt (part a), and a control rod (part c) with a long shaft passes through the body and fits into the neck of the figure's head. The body has jointed arms, each with a long controlling rod attached. Body is painted off-white with red details on piceps, at wrists, and on each slightly rounded claw-like hands. Pink face, slightly downturned with elongated eyes and narrow red mouth. Facial features and moustache painted in black. There is a band of grey-brown fabric adhered around the neck. Shrimp's-tongue style headdress with Garuda Mungkur (short-tongued). Elaborate jamang and upper and lower sumping. Ngore stretches up rear of headdress to Garuda Mungkur. Headdress painted red, green, gold, white and pink. Brown-green, off-white, and yellow batik skirt.

Javanese puppetry as an art form probably developed by the 11th century. The three-dimensional wooden wayang golek puppets of western Java, which are to be distinguished from the earlier and more sacred wayang kulit shadow plays puppets or other forms, appeared during the 16th century. Originally the plays depicted Javanese mythology, but after the Indian conquest of Java the Hindu epics, Ramayana and Mahabharata, were incorporated into the cycles, which comprise about 200 plays. An individual or group hires a dalang (puppet-master) to celebrate important occasions. The performances often last all night and are generally presented in three acts, with vocal and instrumental accompaniment. The individual plays vary widely in detail but usually involve conflict between good and evil. They serve a moral and religious purpose, and more recently, one of political commentary. Each puppet's character is represented by its appearance and placement onstage; protagonists with strong elements of good are placed to the right, antagonists of violent or evil nature to the left. As a member of the Pandawas, Satria Gondrong is involved with the conflict against the evil Kurawas. He is an easily identified and popular character. The figure of noble warrior is central to the ritual conflict between good and evil: as confrontation and war test his virtue and individual qualities, nobility and skill at arms are related. Warrior characters are admired for their prowess, and also for their mythological significance.

Traits characteristic of a male noble warrior. Down turned face shows reverence and modesty, although pink colouring is not usually a positive feature. In this case, it contrasts the white body: pink suggests tendency to violence and force, commonly found with evil characters. However, in this configuration it appears to suggest passionate fury, befitting a warrior. Diadem jamang and sumping indicative of high rank, as are the Garuda Mungkur and batik skirt. These features typically found only on nobles or deities. White body is symbolic of a warrior of honour, unquestionable loyalty, and selflessness. Most striking trait of puppet is extensive ngore (curls of hair) which reaches to headdress; identifies character as Satria Gondrong, who is found in the Mahabharata cycle as a member of the second rank of the Pandawas, although he can appear in all epics. His name, Satria Gondrong, can be translated literally as 'knight with long hair.'