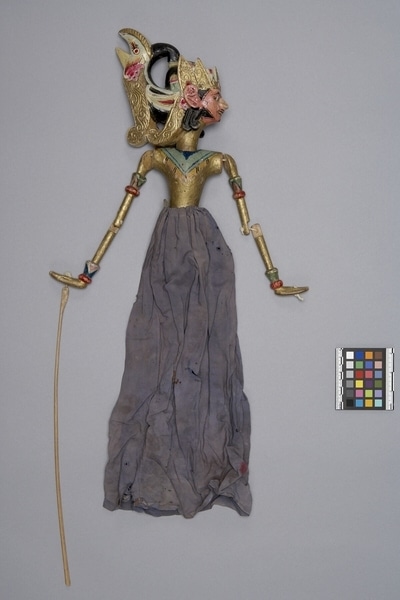 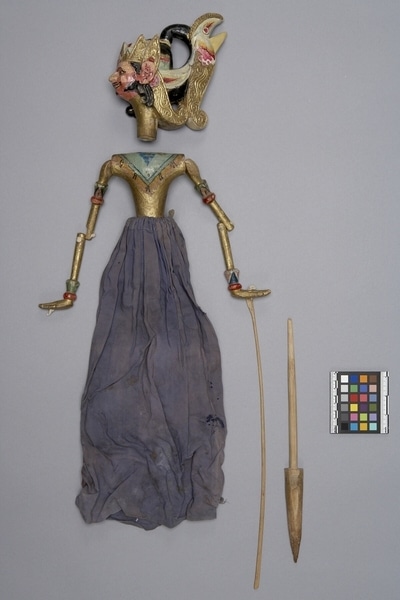 Three-dimensional male humanoid puppet: large head (part b) fits into body with skirt (part a), and a control rod (part c) with a long shaft passes through the body and fits into the neck of the figure's head. The body has jointed arms, each with a long controlling rod attached. Pink face surmounted by elaborate headdress with many elements: diadem, stylized mouth of bird with long tongue, ear ornamentation, with hair emerging from rear bottom. Moveable head attached to rod which extends through torso. Face positioned forward with large eyes cast ahead; moustache and small beard painted on surface, upper teeth exposed. Neck and torso painted gold, green design painted on chest. Arms jointed at elbow attached with string; support stick tied to hand to right, one to left missing. Arm ornaments, hand bent outwards. Long blue skirt.

Javanese puppetry as an art form probably developed by the 11th century. The three-dimensional wooden wayang golek puppets of western Java, which are to be distinguished from the earlier and more sacred wayang kulit shadow plays puppets or other forms, appeared during the 16th century. Originally the plays depicted Javanese mythology, but after the Indian conquest of Java the Hindu epics, Ramayana and Mahabharata, were incorporated into the cycles, which comprise about 200 plays. An individual or group hires a dalang (puppet-master) to celebrate important occasions. The performances often last all night and are generally presented in three acts, with vocal and instrumental accompaniment. The individual plays vary widely in detail but usually involve conflict between good and evil. They serve a moral and religious purpose, and more recently, one of political commentary. Each puppet's character is represented by its appearance and placement onstage; protagonists with strong elements of good are placed to the right, antagonists of violent or evil nature to the left. In the Mahabharata, the dispute over a kingdom between warring cousins, the Pandawas and the Kurawas, is the main element of the plot. It shows the eventual domination of the evil Kurawas after the Bratayada, the final battle, but not without the loss of many noble characters, including Utara.

Pink face with full eyes indicates a forceful character. Headdress with long-tongued Garuda Mungkur (mythical bird) part of a noble's costume only. Position of hands shows dignity and calmness. Broad shoulders and narrow waist imply nobility and beauty. Headdress and other features associated with Utara, son of King Matswapati. He is a general of the Pandawa army who is killed by Bisma, commander of the evil Kurawas in the Bratayada.