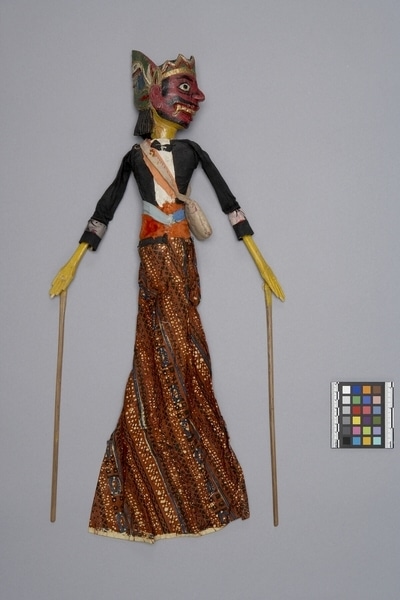 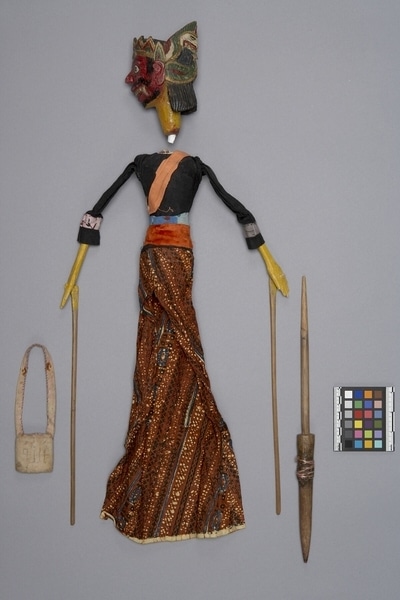 Three-dimensional male humanoid puppet: large head (part b) fits into body dressed in a shirt and skirt (part a), and a control rod (part d) with a long shaft that has been wrapped in pink sythetic twine, secured by resin ?, and the rod passes through the body into the neck of the figure's head. The figure has an off-white bag (part c) with an inscription in blue ink on one side, and what appears to be a representation of a domino on the reverse, also in blue ink. The body has jointed yellow arms, each with a long controlling rod attached. The figure is wearing an elaborate headdress with many elements: diadem, stylized bird with mouth open at rear, ear ornamentation. Face red with large eyes positioned directly ahead, and yellow neck. Beard and moustache painted on, and long black hair. Teeth protruding from upper jaw; fangs projecting from sides of mouth. Clothed in a black tunic shirt with white strip at the front. Orange sash over shoulder down back and front to waist. Orange material around hips; variegated blue band overlapping. Batik skirt of brown with dark blue and beige markings.

Javanese puppetry as an art form probably developed by the 11th century. The three-dimensional wooden wayang golek puppets of western Java, which are to be distinguished from the earlier and more sacred wayang kulit shadow plays puppets or other forms, appeared during the 16th century. Originally the plays depicted Javanese mythology, but after the Indian conquest of Java the Hindu epics, Ramayana and Mahabharata, were incorporated into the cycles, which comprise about 200 plays. An individual or group hires a dalang (puppet-master) to celebrate important occasions. The performances often last all night and are generally presented in three acts, with vocal and instrumental accompaniment. The individual plays vary widely in detail but usually involve conflict between good and evil. They serve a moral and religious purpose, and more recently, one of political commentary. Each puppet's character is represented by its appearance and placement onstage; protagonists with strong elements of good are placed to the right, antagonists of violent or evil nature to the left. In the Mahabharata epic, a conflict between warring cousins over a disputed kingdom is the major plot element. It ends with the victory of the good Pandawa brothers over the Kurawas at the bratayada or final battle. The King of Trajutusna, an ally of the Kurawas, would be positioned to the left. He is defeated by Sutija, grandson of Arjuna.

Red face indicates violent nature; fangs and evident teeth are typical of ogres and demons and considered evil. Flowing long hair symbolic of youth in males. Diadem shows at least minor nobility; Garuda Mungkur denotes even higher position. Build of body, pointed nose and oval shaped eyes indicates some rank again, as well as human ancestr, traits associated with the King of Trajutusna, an ally of the evil Kurawa brothers, known for his violent temper and boldness. The bag he carries is considered a medical satchel.