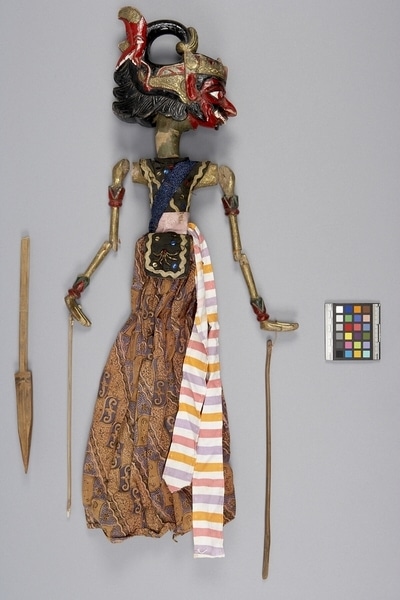 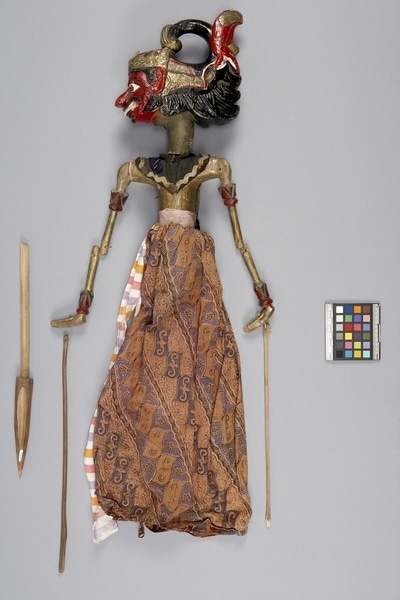 A three-dimensional male humanoid figure puppet. Has a large moveable head with a red, black, and gold shrimp's tongue Garuda diadem. The black hair is wavy with two curls below the ear with sumping. Has a red face and red eyes with black pupils. Has one fang and prominent white teeth. There is a stump nose, extended black sideburns, a moustache, and a beard. The moveable gold painted arms have red and green ornaments at the wrist and bicep with the hands flexed outward at the wrist. Wearing an upper garment of black and gold fabric with four red and blue sequins and a blue chest band. A patterned purple, tan, and black skirt with an apron has five sequins and beadwork. There is a mauve, white, yellow, and pink sash, pink brocade waistband.

Javanese puppetry as an art form probably developed by the 11th century. The three-dimensional wooden wayang golek puppets of western Java, which are to be distinguished from the earlier and more sacred wayang kulit shadow plays puppets or other forms, appeared during the 16th century. Originally the plays depicted Javanese mythology, but after the Indian conquest of Java the Hindu epics, Ramayana and Mahabharata, were incorporated into the cycles, which comprise about 200 plays. An individual or group hires a dalang (puppet-master) to celebrate important occasions. The performances often last all night and are generally presented in three acts, with vocal and instrumental accompaniment. The individual plays vary widely in detail but usually involve conflict between good and evil. They serve a moral and religious purpose, and more recently, one of political commentary. Each puppet's character is represented by its appearance and placement onstage; protagonists with strong elements of good are placed to the right, antagonists of violent or evil nature to the left. Brajamisti appears in plays derived from the Mahabharata epic; he is an incarnation of one of the Pandawa brothers whose conflict with the evil Kurawa brothers often brings them to open war. The characters involved in this struggle represent the fight between good and evil; however, as they all both good and bad traits, the fight is somewhat ambiguous. The evil ogres which appear on the side of the Kurawa are excepted from this ambiguity as they are a clear example of kasar characters.

A large bent nose, large eyes with red irises, bared teeth in the upper jaw, "neerwarts gerichte" fangs, heavy moustache, and short beard characterize a Boma face type. Related to the Bima face type with a courageous, pugnacious nature; the red face, and other traits, indicates an evil (kasar) character. Broad shoulders and chest with a narrow waist are more noble attributes; other refined (alus) qualities are the upturned hands and ornaments. The shrimp tongue diadem, ear ornaments, Garuda Mungkur (short tongue), two extra points from the wing-like ridge, and the hair, indicate a Brajamusti puppet. Brajamisti is a raden or prince associated with the Mahabharata cycle which revolves around the conflict between the families Pandawa and Kurawa. He is the brother of Arimba and an incarnation of Bima, the second of the five Pandawa brothers, known for his extraordinary strength as a warrior.