This page shows all the information we have about this item. Both the institution that physically holds this item, and RRN members have contributed the knowledge on this page. You’re looking at the item record provided by the holding institution. If you scroll further down the page, you’ll see the information from RRN members, and can share your own knowledge too.

The RRN processes the information it receives from each institution to make it more readable and easier to search. If you’re doing in-depth research on this item, be sure to take a look at the Data Source tab to see the information exactly as it was provided by the institution.

These records are easy to share because each has a unique web address. You can copy and paste the location from your browser’s address bar into an email, word document, or chat message to share this item with others.

This information was automatically generated from data provided by Pitt Rivers Museum. It has been standardized to aid in finding and grouping information within the RRN. Accuracy and meaning should be verified from the Data Source tab.

Culture
Haida ?, Tlingit ? or Tsimshian ?
Creator
“Unknown” ?
Field Collector
“Unknown” ?
Previous Owner
“This object was listed in the Delivery Catalogue as having been transferred from South Kensington Museum in 1884. It was delivered to Bethnal Green Museum in July 1877. It was probably displayed at Bethnal Green and/ or South Kensington Museum between 1877 - 1884.” ?
Received from
Augustus Henry Lane Fox Pitt Rivers

This data has been provided to the RRN by the Pitt Rivers Museum. We've used it to provide the information on the Data tab.

Share your knowlege of this item with the RRN community

With an account, you can submit information about this item and have it visible to all users and institutions on the RRN. Request an Account 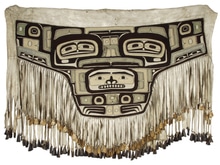